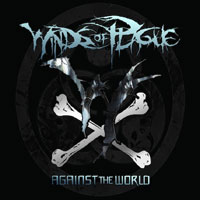 WINDS OF PLAGUE – Against The World

Warrior Metal is flourishing these days, and thanks to well executed promotional campaigns Winds of Plague is sticking their head out amongst the hordes of cannon fodder insignificant warriors. Unfortunately Winds of Plague is more show than muscles. Compared to other recent releases within the Warrior Metal genre, “Against the World” is never more than second rate.

As Turisas failed miserably with their overtly pompous, de-metalized third album this month, Winds of Plague follows in their own footsteps of mediocrity and unoriginality. The last hope in the horizon for Warrior Metal fans is the upcoming Amon Amarth album. Hopefully they will rise to the challenge and once more assert their place at the throne of the Warrior Metal court.

“Against the World” is predicable all the way through. The melodic content isn’t particularly memorable. The symphonic arrangements are nothing but plagiarizing of previous grandiloquent symphonic extreme metal. The riffs and drive of the music appear forced and uninspired. The intro of third track “Drop the Match” is downright embarrassing. It sounds like a Warrior Metal/Limp Bizkit fusion.

Ever since I first heard Winds of Plague I couldn’t help suspecting that this whole band is a feeble attempt by the industry to milk a product that simply doesn’t meet the standards required to defend its own existence. The promotional campaigns have pushed this band into the metal audience’s conscious minds. But the product certainly doesn’t meet my requirements as far as quality and distinction goes.

Fans of the band probably won’t be disappointed, but don’t let fancy packaging, design and big promotion fool you. The quality of this product is questionable. If you can’t hold your hunger for Warrior Metal, the recent releases by Obscurity and Balfor is a much better bet than the stew of year old ingredients and cloned substance that “Against the World” is.

EXCRUCIATOR – By The Gates Of Flesh

WINDS OF PLAGUE – Against the World