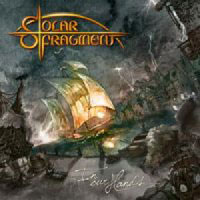 SOLAR FRAGMENT – In Our Hands

Threading in the footsteps of Blind Guardian is a gutsy move which rarely is successful. Not only has Blind Guardian themselves exhausted their own formula thoroughly, but their success has also spawned hordes of hobbit and dwarf bands which have left the whole genre in a cesspool of repetitive tediousness.

Solar Fragment tries to disguise their influences in traditional power and heavy metal armory. Unfortunately their endeavors are most edible when they are closest to ripping off their heroes. The melodic contents reeks of predictability, the riffing are unexciting and repetitive. In addition the lead singer falls in between two chairs. He sounds like a second rate Hansi clone. It would be better if he pursued his own vocal style and gave up the distorted castrato sound so infamously perfected by Hansi himself.

When it comes to Blind Guardian sounding bands, there are only two out there that challenges the original. Firstly, there is Savage Circus with Blind Guardians own Thomen. A band which most of the times feels like regurgitated, albeit very well so, 90’s Blind Guardian. Secondly, there are the Swedes in Persuader. Personally I think Persuader has kicked Blind Guardian’s ass the last years. Emil sings rougher and more powerful than Hansi ever did his disto-castration.

If hungering for Blind Guardian metal, I’d suggest giving Persuader or Savage Circus a chance before Solar Fragment. If BG-metal is your favorite genre in the whole wide world, perhaps Solar Fragment might tickle your fancy. Me, I’d rather listen to the original, but as of lately Persuader is my hottest tip. Especially if you’re prone to the vocal style but can live without the minstrel shit and happy hobbit traveling tunes.