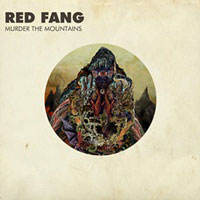 Portland, Oregon’s Red Fang aim to bludgeon with their doom/ sludge metal sound on "Murder The Mountains". When the opening guitar chords ring out on “Malverde” and the Bryan Giles/ Aaron Beam bellow scream team engage your eardrums, you’ll succumb to heaviness like being trapped in a coal mine. There’s something about the low bass tone fuzz in songs like “Wires” or “The Undertow” that takes the Cathedral/ Crowbar sound to even more underground ethics.

When the quartet move the pace up a few notches such as the Clutch-like “Hank Is Dead” the vocals and music combine to put you in a pinned against the wall trance, with the guitar solo developing an additional melodic enhancement to the proceedings. Drummer John Sherman may not be the flashiest percussionist, but he doesn’t need to be for this band to succeed – he merely needs to keep the rhythms moving forward and groove along which he does more than adequately on favorite songs like “Dirt Wizard” or the Black Sabbath-esque “Number Thirteen”.

The description that keeps coming to the forefront is heavy rock- tightly wound and ready to spring on audiences who just need to let loose and emotionally unleash all the pent up angst, frustration and troubles of their lifetime. "Murder The Mountains" rings in the hearts of people who love the grime, the dirt, the reality over anything fabricated or made into senseless hype.