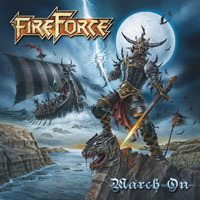 Quite a surprise here bursting forth from Belgium. Fireforce are a quintet that live for old school power metal with a potent traditional flair – emphasizing riffs, solos and melodies that induce windmill hair, head banging and devil horn salutes. Forming out of the Double Diamond remnants, guitarists Erwin Suetens and Steve Deleu along with former DD drummer Tom Heijnen fill out the lineup with powerhouse singer Flype and bassist Metalpat – releasing their debut album "March On" a couple of years after their initial "Moonlight Lady" EP. The energy and performances on these 12 tracks recall not only a twinge of late 70’s to mid 80’s British metal excitement, but also live for the days when power metal came from the guitars, the vocals, the spirited rhythm section and the harmony solos – not the multi-tracked over processed studio enhancements or superficial happy keyboard notes.

You’ll hear the spirit of Running Wild and Helloween in songs like the mid-tempo “Firestorm” or the faster “Moonlight Lady”, but I can also sense appreciation for Iron Maiden and Judas Priest with the Deleu/Suetens picking tradeoffs. Fireforce don’t forsake a lot of the current movement either, taking a tip of the speed attack nod to Mystic Prophecy in personal favorite “Annihilation”. The mid section in “Fly Arrow Fly (Crecy 1346)” will bring out the air guitar maneuvers in most and “Mona Lisa” also wins me over because of Flype’s high range and passionate metal lungs – soaring and commanding like the best traditional vocalists in the business. It’s easy to hear why Fireforce have made an impact opening for Jaguar, Killer, Blaze Bayley and Vicious Rumors so early in their career – the tempos and rhythms have the necessary hooks plus heaviness to keep you returning again and again.

Surrounding themselves with R.D. Liapakis (Mystic Prophecy singer) on production duties and an epic warrior cover from Eric Philippe, Fireforce will not be confused for anything outside of their brand of traditional power metal. There’s plenty for me to take away in terms of talent, output and songwriting that Fireforce won’t be an opening act for long if they continue with consistent albums like "March On".