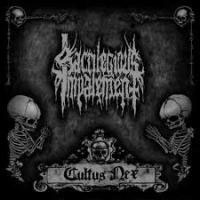 By this stage you’ve seen the name of the band and read the score, so you have probably already guessed that this is yet another mediocre BM release. Sorry to confirm your fears so early in the review, but you are correct.

Although Sacrilegious Impalement hail from the Finnish underground, the production of this release is far from the low-fi necro you might expect. In fact, the sound is relatively full and modern, almost resembling death metal in some passages. It still has plenty of discord and atmosphere, but backed with powerful, chugging guitars and driving drums.

Some of the slower parts have that mesmerizing quality essential to good BM, with eerie, soaring solos, and some of the mid-paced riffs have the type of old-school catchiness that Watain made look so easy, but the fast parts aren’t that effective and whole offering lacks the menace, potency and originality that would take it to the next level. While not strictly a release to avoid, "Cultus Nex" is one of a myriad such records in an already oversubscribed genre and as such, is unlikely to garner much attention or interest.

NO GRAVITY – Worlds In Collision