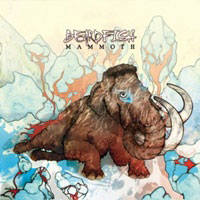 Productive would be an accurate adjective to describe this Swedish progressive rock group. Their sixth album "Mammoth" appears a year and a half following their last studio offering, the very expansive "Destined Solitaire" – and Beardfish rarely make their audience wait this long to hear some fresh songwriting. They didn’t let disappointment derail their momentum when label restructuring (on distributor’s SPV end) cut their funding for their opening slot on a North American Dream Theater tour- they latched onto a Pain Of Salvation tour in mainland Europe and continue to soldier on. It’s the way most bands have to build the lifelong dream – much like the ant philosophy, one step ahead of the other as a team accomplishing more every waking moment.

Vocalist/ keyboardist Rikard Sjoblom flexes his Rick Wakeman / Tony Banks influences with passages of restraint and slower build ups to create tension in the arrangements – especially working on the 15 minute plus epic “And The Stone Said” along with a well placed sax solo during its jazzy mid-section. The quartet step into shorter constructs that pay big dividends on songs like “Tightrope” and “Akakabotu” – the latter probably their closest ‘radio friendly’ offering to date with serene vocals and snake-like acoustic to electric guitar parts. “Green Waves” even has some feedback riff parts that delve into 2112 era Rush – no sound or nuance seems out of the realm of Beardfish’s scope.

If you feel like everything has already been written and recorded in the progressive rock genre, Beardfish will make you reassess that statement. At 52 minutes "Mammoth" says just enough without overreaching or exhausting the listener- which can happen from time to time with certain acts in this style. That’s why when I need my forward thinking musicality while keeping each song whether long or short in focus, I consistently return to Beardfish.