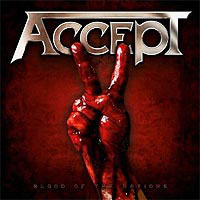 Surprise comeback of the year. Udo doesn’t return for round three, but Mark Tornillo is the voice up for the task. Sharp Andy Sneap production keeps this veteran traditional trio sounding lean, mean and ready for attack mode. “Teutonic Terror” indeed!

BLIND GUARDIAN
"At The Edge Of Time" (Nuclear Blast)

I didn’t get to any national shows this year as I normal would due to personal and family issues consuming much of my time. My favourite show I attended would be the Metal Thursday 100 Show anniversary on 12 August 2010 at Ralph’s Diner in Worcester, MA. The hordes came out in support of a Blistered Earth thrash reunion, doom/death act Shroud of Bereavement, death act Soul Remnants and black metal openers Sarcomancy. Promoters Chris Farmerie and Samantha Godbout deserve accolades for a 4 plus year tradition, keeping the metal flame alive in my home state.

The personal connections fans can now make to their favourite bands through social media mediums like Twitter, Facebook, MySpace and YouTube among others. Gaining the opportunity to know your music idols through conversations solidifies bonds that can carry appeal beyond a band’s last album or show.

The best album covers in metal in my opinion give you insight into what you should expect musically before you hear the first note. True metal defines this work of art- chilling, epic and something you would be proud to adorn on your bedroom wall.

Iron Maiden. At age 12 hearing Maiden Japan with Paul Di’Anno screaming “Running Free” on my friend’s stereo and then taking in "Piece Of Mind" with the thunderous Nicko McBrain drum roll that begins “Where Eagles Dare” set me on my metal for life course. While I followed other bands in my teenage years, none consumed my record and concert world much like these British men. Everything from Iron Maiden to "Seventh Son Of a Seventh Son" would be quintessential for any indoctrination into the metal ranks.

Believe it or not, less releases. At this point in time, I understand the economics but there are just so many recordings hitting the streets that I think the poor efforts take away time, energy and attention from the unheralded gems – and often burn people out on certain genres altogether. Bands have to generate revenue – and labels expect sales to dictate funding for the touring/ festival circuit – I just think we have to look at alternative revenue streams and separate those deserving from those who would be better off on the sidelines.