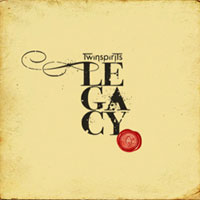 When bands are able to keep steady, secure lineups in place, usually the quality of musicianship and final product rises many notches. Italy’s Twinspirits spent a fair amount of time on the road supporting their second album "The Forbidden City" and now the quintet remains in tact for the follow up "Legacy". This album contains two distinct parts – almost as if you are listening to the old vinyl way with a side a and side b. The first six songs are individual compositions and much more direct, powerful efforts that while still containing progressive metal elements see keyboardist Daniele Liverani apply his songwriting tools in a much more compact 4-5 minute manner (outside of the 8 minute opener “Senseless”). The final 5 tracks comprise “The Endless Sleep” multi-suite movement, taking up the last 29:27 of the album and describe an out of body life/ death experience for the main character, meeting up with people from his actual human life against his afterlife with a mentor guide.

Songs like “Blind Soul” and “Slave To This World” have strong bass motions, flashes of drum brilliance and vocals from Goran Nystrom that run from a deeper timbre to solid melodic highs in line with the best work of Urban Breed. “Don’t Kill Your Dreams” starts as a tranquil ballad with piano and Goran’s voice before you get the chance to hear Tommy Ermolli’s multi-layered guitar style – as he flashes some southern rock and blues into his normal metal licks and tricks during this addictive slow number. “Over And Over Again” contains those quick hitting poly-rhythms, dance-like Liverani keyboards, and wide open vocal scheme that makes this one the winner of Legacy for my money.

“The Endless Sleep” intro begins with violin/ viola orchestration courtesy of Robin Olson – and over the course of the next 4 parts showcases Twinspirits at their progressive, dynamic pinnacle – the title cut giving drummer Dario Ciccioni and bassist Alberto Rigoni a fair shot at displaying their chemistry and technical prowess while Daniele takes his keyboard solo into Dennis DeYoung-like territory. “I’m Leaving This World” has that surreal/ funeral quality as the main character moves into his afterlife while the neo-classical guitar/keyboard note flurry swirls like the lyrical duality while “Tell Me The Truth” ends the album with another epic ballad.

At 60 minutes I believe Twinspirits have their ideal time frame for their sound – and this should help the band make inroads within the ProgPower crowd in Europe and America. This album has the balance I desire as a progressive metal connoisseur between musicianship and memorable arrangements – so seek accordingly.

FEN / DE ARMA – Towards the Shores of the End