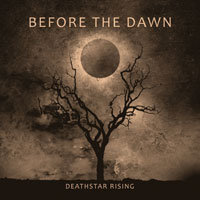 BEFORE THE DAWN – Deathstar Rising

One of the more consistent acts who’ve been ascending the ranks due to critical and fan acclaim, Finnish band Before The Dawn climb to a larger international stage with "Deathstar Rising", their sixth album. Guitarist/ vocalist Tuomas Saukkonen, bassist/ clean vocalist Lars Eikind, second guitarist Juho Raiha and drummer Atte Palokangas sit in an enviable position to take their brand of melodic gothic death metal (or as Tuomas prefers to call it, melancholic Scandinavian metal) to the masses at just the right time in their career. So you’d expect the group to soften their approach, write for the biggest market possible, and just turn their heads away for commercial acceptance, right?

You’d be so dead wrong based on my multiple impressions of this 10 song full length. Atte channels his John Bonham meets Neil Peart fill ability on the opening minute of “Sanctuary” – a song that may open quietly with Lars’ heartfelt melodic words but quickly picks up into a hypnotic jackhammer riff groove-fest. “Butterfly Effect” should be a blueprint for the direction In Flames needs to return to – speedy with cultural nuances and hooks without focusing on the lowest common demographic (what sound will bring in the most money). “Winter Within” recalls the dark beauty of Sentenced in terms of the echoing guitar refrains set against the otherwise deep mid-tempo rhythms. Juho throws down some killer lead work on personal favorite “Deathstar”, sometimes trilling notes before hitting his harmonic stride in an understated, appropriate for the arrangement way.

Tuomas is another asset to the growling death community for he proves in songs like “Remembrance” and closer “Wreith” that you can be deep, individual and understandable when conveying the lyrics that are often as poetic as they are reflective of personal demons and despair to overcome. Opening and ending the album with brilliant acoustic guitar work, "Deathstar Rising" should be the breakthrough the band deserves in every metal market.

I’m excited to hear what Before The Dawn have in store for us, as I’m growing more accustomed to using their music as a release, an escape, and therapy all rolled into one.