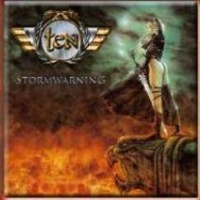 My first encounter with this UK melodic hard rock band would be 1996’s second album "The Name Of The Rose". Singer/songwriter Gary Hughes comforting, old school approach brought to mind greats like David Coverdale, Glenn Hughes and Joe Lynn Turner – and musically his band mates exhibited class and grace unheard of in years, especially from their country or beyond. Shoring up the band in 2011 means a prolonged absence from the studio and live scen e- so anticipation for this ninth album "Stormwarning" would be an understatement in the eyes of Ten fans.

Drummer Mark Zonder provides a huge uplift to the rhythmic backbone for this album. He understands when to just throw in that cymbal dynamic nuance or slight up-tempo change (“Invisible” being a clear example) to differentiate each song. What I also enjoy most about this album is a return to the song-oriented sound Ten began with along with the heavier guitar overtones found on "Spellbound". “Endless Symphony” opens with a tribal/ new age Toto-like drum passage against AOR keyboards before Neil Fraser and John Halliwell rally with their electric and clean riffs. “Book Of Secrets” comes closest to the older Whitesnake meets Gary Moore sound we’ve come to know and love – a bluesy melody with some snake-like guitar hero work weaved in and out of the framework.

Producer Dennis Ward keeps the six piece as lean as possible sonically – as you can expect plenty to sink your teeth into with the longer than normal arrangement lengths- often reaching past the six minute mark. My personal favorites include the understated “The Hourglass And The Landslide” which would have been perfect on Gary Moore’s Run For Cover as well as the slow building “Centre Of My Universe” that has a slight “Enter Sandman” tension against the otherwise highly addictive vocal line and harmonies.
A return to form I’m sure many will embrace with open arms – Ten and Stormwarning couldn’t have come at a better time in the sub-genre of melodic hard rock.