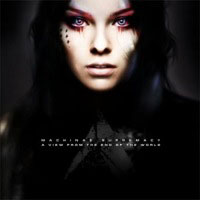 MACHINAE SUPREMACY
"A View From The End Of The World"

Finally a new album from the SID metallers from northern Sweden. An album packed with superb old gamer synth and atmosphere. Looking forward to see you in Oslo guys.

BLIND GUARDIAN
"At The Edge Of Time"

A stronger album than their previous, and it just Rock! Even thou it’s far from their early trashy stuff, this one’s a huge blast of guitars, drums, orchestra and a lot of Hansi Kürsch. If they just can simplify their next album, I’ll be really pleased.

Accordion and pan flutes has never sounded so god. It might not be the most inventing album ever, but it’s fun as ever. The pure sound quality and production of this album also enhance its better sides.

Alice Cooper, Hamar Music Festival. Alice is an amazing performer. Which other artist gets killed three times during a show? And a set list with songs from all the decades of his years as an artist made this an really god show. Kudos for crazy audience.

Portnoy’s departure of Dream Theater. I’ve always thought that DT was his life long project, but it seems that he has other thoughts. The deaths of Dio and Paul Gray were a bit shocking too.

Best cover is a tie between Burzum’s "Belus" (seriously, what’s with all that wood?), and Christopher Lee’s "Charlemagne", but gotta respect the Lee. He is looking really badass on his throne, with sword and everything. No, I haven’t heard it yet, but this looks… Rockm/

Both Pink Floyd and Blind Guardian are great bands. I have to choose them both.

The next Stratovarius album, and a new Seventh Wonder drummer. The previous Strato album was one of the best that year, and a good reboot for the band. Let’s hope it continues. Seventh Wonder needs a new drummer! They can’t quit now.