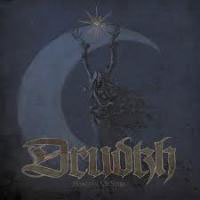 Over the years Drudkh have garnered a reputation for fearlessly exploring new sounds and experimenting with different genres. From the blackest of the black to atavistic folk music, they have been largely successful in their undertakings, in part because of their artistic sensibilities and in part due to the single-mindedness with which they pursue their goals.

“Handful of Stars” marks another departure for the band. Not folk music and far removed from BM, the music on offer is probably best described as alternative progressive metal. The guitars are loose and jangly, the bass noodles along and the drums scatter about, driving the songs and contributing to the mesmerizing quality that characterizes all Drudkh releases. It could be that Roman’s vocals are the only instantly recognizable element to those who know the band from other albums (and perhaps the weakest part of the offering as far as I’m concerned).

Although there are six tracks, 1 and 6 are 1 minute-odd intro/outros that have little bearing on the business at hand. Apart from that we have 4 tracks averaging almost 10 minutes each. These songs bear the plaintive sound familiar to those who caught any of the band’s folk output. Minor chords and lingering picked notes evoke a feeling of wistful loss for times past and the hidden wild places of the Earth. Each of the songs builds up to a gentle climax and denouement, so this is not an album you will love for its standout riffs. Rather, the songs work as a whole and the album is only really possible to appreciate when taken in its entirety instead of broken into tracks and sound bites. The result of this is that “Handful of Stars” works better as an album you play in the background than one that you would sit and listen to. Perhaps it has a greater effect on the emotions in a subconscious way that it does on the intellect when listened to more actively.

Overall, I’d say “Handful of Stars” is one that will split existing fans into two counts; those who just can’t figure out what the hell their beloved Drudkh are up to and those who appreciate the subtleties and maturity of the music and welcome this latest chapter in their history.