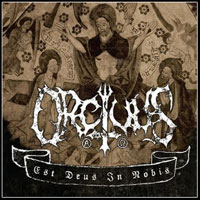 But of course, another Swedish black metal band, filed under the breed of Swedish orthodox black metal. And as with Norwegian bands back in the day, don’t you get somewhat bored of all these album recorded at Neromorbus Studio? Of course we don’t. I mean, I don’t give a shit about where an album is recorded, as long as my ears take in the music and my body and soul respond to the atmosphere, violence and harsh attack on the normalization of my life. Orcivus have with "Est Deus In Nobis" recorded a fairly well album that doesn’t stand out by originality but still contains enough quality to relive spin after spin.

The songs have the hooks, the riffs and the ugliness I demand from my black metal of the Swedish brand. The sound of the guitars is ugly, yet it is easy to distinguish the various riffs and transformations from the rather fast to the more mid-paced music, with the feeling that all is done with ease and not forced at all. The hints of Watain and other Swedish companions are present, yet the music does not feel like cut’n’paste at all.

At times the fast forward parts feel a bit "been there, done that" but I suspect these are necessary to make the really good parts stand out. Just take a listen to the amazing closure of the album. "Salve Satanas" is a mid-paced monster that makes the album culminate on top of their own game. "Est Deus In Nobis" is simply put another Swedish quality black metal release, and even though Orcivus don’t reach the gold medal, they’re ranked way above average in my book.