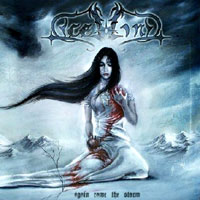 My first impression of “Again Came The Storm” should prove to be mistaken. At first listen, or glance for that matter, Icewind appeared to be nothing but another melodic power metal band in the endless sea of such. But after listening to it for a couple of days, I caught myself humming to their melodies out of the blue.

Imagine the combining of standard heavy metal and American power metal with some Kamelot-like sensibilities in the melodies, and you’d get something like Icewind. It reminds me a bit of a faster paced Kamelot. The Singer isn’t quite as good as Mr. Kahn, but then again, who is? The singer does a decent job, as does the rest of the band. The melodies abstain from the happy-happy-joy-joy tendencies which often curse many power metal bands. The production is good, and the added piano-play raises many of the tracks from out of predictability.

Still, the latter half of the album isn’t as good as the first, and I could wish for some more original material. I do hum some of the brainglue-melodies, but I nevertheless feel that I have heard similar stuff a thousand times before. If the band managed to add some personal identity to their material I am sure I will like it a lot better the next time around.