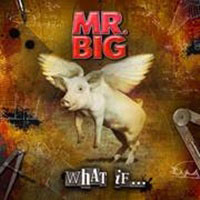 If we look back at the history of melodic hard rock, you had many musicians who seemed to get into the genre chasing its burgeoning popularity during the 1980’s and a second group who sincerely set out to make their own mark. For every band seeking to become the next Bon Jovi or Def Leppard, you had others who could truly play their instruments and create some sustainable songs through the years. Mr. Big may have been best known for their number one acoustic ballad “To Be With You” – and yet those who study backgrounds would know that bassist Billy Sheenan and guitarist Paul Gilbert are two of the most gifted gentlemen at their respective tools of the trade.

"What If…" is the full on studio reunion record with vocalist Eric Martin and drummer Pat Torpey – and the foursome appear engaged in the delivery of strong songwriting and impressive individual performances. “American Beauty” has that old school Van Halen boogie with the guitar and bass doing futuristic tap solos that mesmerize as much as add texture to the song. The follow up “Stranger In My Life” contains a lot of their late 60’s/ early 70’s vocal harmony influences within this semi-power ballad. “Still Ain’t Enough For Me” resonates again with the finger flurry out of Sheenan and the bluesy comfort you receive from the voice of Eric Martin.

Keeping the quality on high throughout the 12 songs, producer Kevin Shirley (Journey, Dream Theater, Iron Maiden) gives the band a robust, lively sound – capturing the genuine fun every listener should feel with this album. Mr. Big understand that their style is conducive to acoustic driven material like “All The Way Up” as easily as hard charging numbers like “Around The World” where everyone gets a chance to stretch their theory and skill set aptitude. And you have to love the pig with wings cover art- probably a metaphor on the likelihood of a reunion taking place based on their less than acrimonious split.

Scary to say seven albums into their career, but Mr. Big may have written and recorded the best top to bottom full length in their history. Timeless ingenuity, Paul Gilbert gives Mr. Eddie Van Halen something new to attain in his riff writing and if the stars align all music fans in every country big or small will embrace "What If…".