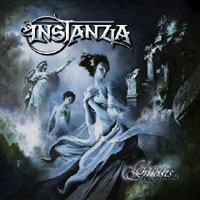 Though this band promotes themselves as progressive power metal, it is more accurate to describe their music as standard power metal. The production is good, the instrumental interaction is flawless, but still there is quite a lot missing for Instanzia to stand out among the hordes of similar bands existing in today’s power metal scene.

The singer is to me quite annoying after a while. He does avoid the highest falsetto power metal vocal style, which I like, but he doesn’t seem to utilize his full range when singing. Mostly the vocal lines are sung in mid range monotony. It doesn’t help that the melodies are very predictable, unoriginal and not particularly memorable.  It is also a problem that the music is formulaic from start to end. Each song has the same build up of verse, bridge and chorus. Every chorus is of the Blind-Guardian-all-song style which is just all too familiar for my taste.

Still, if you are fan of power metal you could do a lot worse than Instanzia. I am sure they have their audience out there. But don’t expect any original riffs or melodies. If nice production and well performed instrumentation is enough to rock your power metal boat I suggest you give these guys a chance. I will check out their next endeavor, since they do appear to hold some untapped potential in there somewhere.