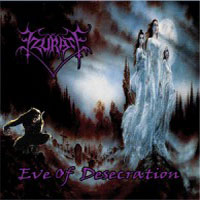 Ezurate describe their music as ‘Pure Armafu¢kingeddon Soulraping Black Metal’, and that’s probably as good a description as any. Although these guys hail from the States, the music is redolent of some of the more extreme-sounding Scandinavian BM bands. Think of Marduk at the turn of the century, or early 1349. Harsh, brutal and caustic, cold and filled with hatred.

The approach is uncompromising as the five-piece beat each of the 15 tracks into submission. Yes, you heard right, that was 15 tracks. This album clocks in at over an hour, with each track hammered home like a crucifixion nail in 4 minutes or so.

Unfortunately, all of the blasting beats and speedball solos feel more like bluster than a real threat. The music made very little impression on me and in terms of songwriting, the best I could say is that a couple of the songs are ‘ok’. There is not much by way of atmosphere and, most importantly, a big lack of charisma.

This release would have been ordinary a decade ago and I can’t see why modern listeners would be interested in it. Black metal has come so far in recent years and has so much more to offer than this…