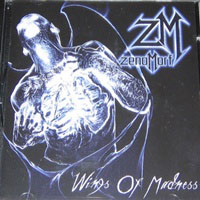 You have to love bands who’ve been given a second chance to make an impression on the metal scene. This Norwegian traditional band for instance began in 1987 – and only released their self-titled debut in 2009! Not wanting to waste any time, the follow up Wings of Madness comes out a quick year later – an 11 song plus intro offering that lives for the old school 1980’s conventions.

I hear a lot of American, British and German favorites when listening to tracks like “Riding The Tundra”, “Into The Fire”, and the title track among others. The guitarists have an affinity for galloping riffs that often delve into darker chord progressions – almost as if Iron Maiden and Judas Priest got into an early Metal Church tussle. The bass playing also gains a prominent part in the Zeno Morf sound – much like Omen or Manowar- evident through moving material like “Requiem” and “Pleasure and Pain”.

Where Wings Of Madness will falter in the eyes of the critical are the vocals. Former wrestler turned singer Terje has a very limited range that he uses more of an expressive, dramatic delivery to get the songs across. His English phrasing and syllable accents often produce cringe worthy moments (the chorus of “Riding The Tundra” where the last word sounds more like thunder than intended) and makes me wish we had a cleaner, stronger vocalist fronting these songs.

Musically though there’s plenty to head bang about, so Zeno Morf are on the right track if you don’t mind an inferior vocal performance. If I had the ability to Auto-tune my laptop media stereo, this would be much more likely to meet my full approval – otherwise Wings Of Madness struggles to fly freely to these ears.