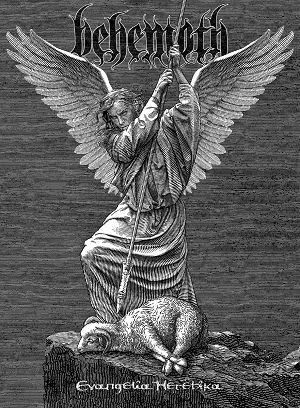 One may ask how necessary a DVD of this kind is. I am somewhat uncertain, since I have most of the Behemoth releases and among them there already are 2 DVD’s. I would think this was released now as a substitute for the planned releases around "At the Arena ov Aion" that never happened and I also assume that Nuclear Blast Records would have a quick release after the signing of Behemoth.

It is a beautiful, rich and professional DVD we’ve got here. It reminds me a bit about the design on the "Demonica" release, but here the cover species are in the style of "Evangelion"; Nergal as an angel about to kill a goat…

…and so over to the very nature of this wonderful DVD; 3 discs and a 16 page booklet with lots of cool pictures of the band members. There are two live recordings on the main disc. The first show is from Warszawa last year, while the other is from Paris 2008. I recommend that you see the footage from Paris first. There’s nothing to complain about concerning the sound and filming in these recordings and they both gives you, the listener, a sense of being present during the concerts.

The set-lists differ for the two events, and the main reason is that the concert in Paris was held before the "Evangelion" was released. I have personally not seen Behemoth live after "Evangelion" came out, but watching this footage from Warszawa there’s no doubt that the songs from the band’s last studio album are superb live. Especially the last song "Lucifer" works fine. Seth and Orion use their vocals more in the livesetting these days. I highly approve this, and I think that in particular Orion does a magnificent job, he has great dark and brutal growls that are perfectly suited to the music of Behemoth. His vocal is not similar to Nergal’s, and it is almost like it gives the music a new dimensions.

On disc 2 there are loads of bonus material, including two documentaries. There are lots of exciting and fun footage from backstage, tour bus, with or without fans, during an interview and whatever really. There’re probably about a million various live recordings on this bonus DVD. Also, there is a Behind the Scenes section with 5 making of-videos. In addition, you will find all 8 official music video Behemoth has released. Of course, most of the talking is also here in Polish, whether you choose the English or Polish version from the menu. There are English subtitles for those of us who are not very good in Polish and that makes the documentaries even more fun to watch.

Let us not forget that there is a bonus CD too. It contains the concert from Warszawa, the same as on the DVD disc. A wonderful listening experience from start to finish; it’s the only thing I need to say about this album. If you remember what I wrote about the sound before, that sentence applies even more here. Copy the CD over to your iPod so you can live in the belief that you are at a Behemoth gig around the clock.