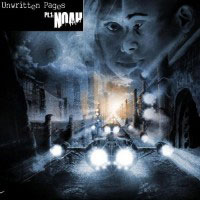 It’s hard not comparing Unwritten Pages and their space metal opera to the various projects of Arjen Lucassen. Unfortunately for Unwritten Pages, this ambitious project is but a pale reflection in comparison to Ayreon or Star One. The band really tries to fit their music within the space metal opera genre perfected by Lucassen. “Noah” has its shortcomings though, in most areas except the cover artwork.

First of all, the reason why Ayreon’s exaggerated bombastic works so well, lies in the authority in which it is performed and produced. The production on “Noah” is rather thin in comparison and appears flat. All through the album this is enhanced by what appears to be an understated use of reverb.

Secondly, the intertwining of progressive metal elements and melodies is many places colored by odd, unconvincing transitions. This makes the melodies seem forced and counter the fluidity of many songs. The key to convincing progressive melodies is to make the evolvements in the music seamless and natural. On “Noah” most of the heavier songs does not convey this.

Thirdly, it is impossible to forget Damien Wilson’s contribution on Lucassen’s Star One albums. His vocals performance on “Noah” somehow seems uninspired, not using his full spectre, as I know he is good for. When the melodic material in addition isn’t particularly memorable, Unwritten Pages never becomes more than a second rate band within the confines of the space metal genre.

It is hard venturing into the landscapes of Ayreon when the genre has been so typified and perfected by Lucassen. Unwritten Pages has some work to do if they want to take up the competition. Perhaps they should try to think outside the box a bit more next time. This effort is too close to Ayreon, lacking the qualities that pull of the whole overtly bombastic progressive space metal operas in Lucassen’s case. The ambition seems to be there though. I wouldn’t rule these guys out completely. After all, this is just their debut album.