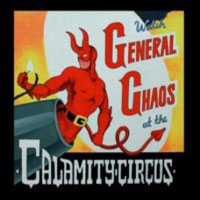 Lock up your daughters and hide your sons, the calamity circus is coming to town and it leaves a trail of chaos and destruction in its path. General Chaos, a band consisting of 5 German metalheads, came together from several other bands to make metal, the end result was "Calamity Circus", a 32 minute long display of power and talent in the name of metal. The albums opens with "Speech", a track setting the standard, it has a magnificent riff that gets you hooked and what better way to keep it going than with "Black belt" and "Second to none", a track that gets stuck in your head and signing "You can’t defy me, I’m second to none" all day long! Next follows a trailer of some sort which is a weird thing to have after setting the tone of an album and it wrecks some of the flow of the album.

The album starts off with an originality that is hard to come by, great riffs and terrific rhythms to get the blood pumping, the rest of the album on the other hand fails to follow in the openings lead. It becomes stale, a bit repetitive and loses all of its originality by track 5. If your only purpose for listening to this album is to get rid of some aggro then this is definitley for you, however if you are looking for something more than that then you need to keep looking cause this album just delievers the most basic metal one has come to expect from this genre, it’s good without being original, it’s heavy without being brutal and it’s consistent but it gets boring. On some albums consistency is a good thing, on this album it doesn’t work, it get’s a bit one sided. The album does have a good closer in "Black as Disease" which saves some of the last impressions one might get from this album and it saves the overall impression as well. Noteworthy tracks are "Speech", "Black as Disease" and "Second to none"