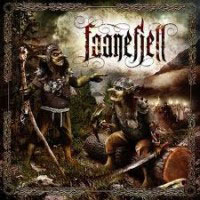 It’s about time that Norway got a folk-metal band with some cohones. Since Einherjer went into hiatus, there hasn’t been much Norwegian folk metal to be proud of. Sure, we have had some valued efforts by band such as “Åsmegin”, “Sorgsvart”, “Glittertind” and “Lumsk”, but both the Swedish and Finnish folk scene have overshadowed Norway’s for years. Being that Norwegian bands had a part in the genres emergence in the 90’s with Storm and Isengard, I have longed for a Norwegian folk metal classic along the line of what Sweden and Finland have produced (in my book, classic folk metal bands would be Mithotyn, Thyrfing, Vintersorg, Otyg, Moonsorrow, as well as the instant classic as of 2004 Turisas).

Now… As for our friends in Faanefjell, they do go all in. There is a story teller reading tales about trolls and their hunger for Christian flesh. There are violins, horns and male choirs. It all seems pretty stereotypical. To top it off, they utilize the biggest cliché in the folk metal biz as the tunes of “The Hall Of The Mountain King” is incorporated in the song “Til Kamp”.  But as previously mentioned, with the right amount of cohones, it is working for Faanefjell. I must admit that their most uptempo bits are somewhat anonymous. Luckily they spend most time in mid to fast midtempo, which is what they do best. The production, singing and incorporating of violins reminds me of Thyrfing around “Vansinnesvisor”, which is downright awesome.

I would say that the basis for the music is symphonic black metal with folk melodies, and a strong production.  The symphonic elements is never overdone, but rather tastefully put in the background as atmospheric injector.  I also like the absolute absence of ompa ompa, and happy black. Faanefjell is like folk metal should be, sinister, powerful, and performed with troll authority. The male choir choruses do get a bit pretentious at times though, killing the tough atmosphere.

Not much has been done wrong on “Trollmarsj”. I do however think the melodic material could have been a bit more memorable. It would give the album even longer life expectancy.  Some bits are somewhat repetitive, and some folk themes appear a bit similar. Still, as far as a debut album goes, this is a great effort. Scrap the male choirs till next time, work a bit more on your melodies, and a folk metal classic might very well be in the making.  Fans of the before mentioned folk classics should definitely check this out. My favorite tracks are “Hedningens Time”, “Til Kamp” & “Drikkegilde I Jotunheimen”. Check out the latter’s Storm-like riff at 01.03. Great stuff.

NECRONOMICON – The Return of the Witch