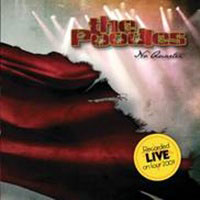 THE POODLES – No Quarter

One of the front runners in the burgeoning Scandinavian melodic hard rock resurgence, it was only a matter of time before a live album would chronicle their exploits. "No Quarter" captures The Poodles on tour last year in support of their third studio album "Clash of The Elements" – so it shouldn’t be surprising that a bulk of this 13 song record contains the essential staples from this effort (“Too Much Of Everything”, “Caroline”, “I Rule The Night” being my personal favorites). Do not fret though, as you’ll get choice cuts from Metal Will Stand Tall and Sweet Trade, as well as a brand new song “Lullaby For Jimmy” and the prominent back and forth audience singing interaction which has been a hard rock staple since the beginning of time it appears.

In the prime time stage these songs take on much more of an arena rock feel- the guitar tone from Henrik Bergqvist has more of a bluesy, Whitesnake or Tesla feel through songs like “Thunderball” and “Flesh & Blood” (the latter sounding like Gotthard meets Gary Glitter). The Poodles excel in terms of melodies and background vocals – the multi-part harmonies really encourage their club and festival audiences to grab the hooks of each track that much quicker. Main vocalist Jakob Samuel doesn’t merely replicate every song in studio form- which gives the listener a chance to hear him take certain notes up or down as necessary depending on the mood of the song.

Christian Lundqvist’s 3:22 drum solo brought the overall score down a touch, as it’s not even close to Neil Peart excitement –  he relies on single kick work and mead hall crowd cheers to move this along and I would be heading to the bar for another drink.

Early 2011 should see a fourth studio platter hitting the market – in the meantime this is a nice tide over and chronicle of current melodic hard rock excitement.