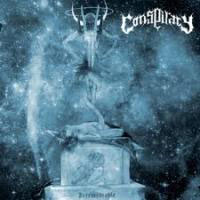 “Irremediable” is the work of multi-instrumental virtuoso Carpathian Wolf (better known as Al’ Hazred of Melechesh). The music is probably best described as Symphonic Black Power Metal, as it mixes classic BM with orchestral-style keyboards, both BM and clean vocals and the odd metal/power metal riff here and there. The result is something like Absu, Dimmu Borgir and Iced Earth having a monster jam session!

This album had a strange effect on me. The first half-dozen times I listened to it, I thought I had stumbled on to the album of the year, a candidate for only the second 6 score I have ever given. So what happened?

At first I was awed by the sheer technical mastery of Mister C. Wolf. I was blown away by the power and speed of faster songs such as the mighty "End of Religion". The quirky, original orchestrations worked their magic too. Then, I left the album for a few days. When I returned to it I found that much of my initial enthusiasm had dried up, as if the songs had gone slightly stale in my absence.

Once I really got into the album, I found that the tracks weren’t as strong as I’d believed at first and the emotional impact was suddenly only half what it had been. Perhaps “Irremediable” is one of those records that wears its heart on its sleeve: you get everything in the first few listens and then there is nothing more to give.

Having said that, this is by no means a bad album. There are plenty of jaw-dropping tunes to be found and an incredible range of styles, skillfully blended by a superb musician at the top of his game. I still find it difficult to believe he played every instrument on the album! Definitely an act I will be keeping an eye on the future.