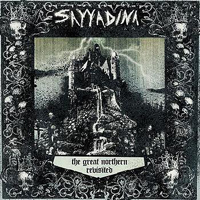 I won’t say it’s the most advanced metal I have heard. The music is far more impressive than the vocals. That’s the first thing I decided after listening to this record one time. I found the backing vocals a lot better than the main vocals, and that’s not a good thing for a band.

The music has some variety, but you get what you expect from a band like Sayyadina; 30 short tracks in a little more than 30 minutes, all fast and furious and with mostly screaming vocals. You get tired and want something else after the second round. At least I wanted something else.