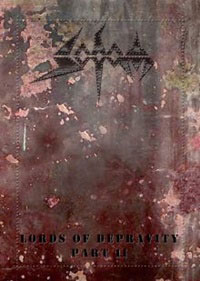 Most bands are unwilling to spend years pulling together a DVD package these days. German thrash mainstay Sodom however, aren’t just your ordinary band. The follow up to their original "Lords Of Depravity" 5 hour part 1, we gain the good fortune of 5 more hours of history, videos, interviews, stories and live concert footage that picks up the story in the mid 1990’s through the last album cycle prior to their "In War and Pieces" recording. Spread over the course of 2 discs, disc one concentrates on the chronological album by album history of Sodom, along with Tom Angelripper’s solo drinking album career, the up’s and down’s of touring (South America, amazing – their first Milwaukee Metalfest experience in the US, not so much) and entertaining tales of commitment, persistence and heart.

Outside of the normal band interview memories, Sodom go full out with including press people, promoters, record producers and so forth to carry even more credibility to the Sodom history. Often these opinions are no holds barred – as many haven’t liked some of the style changes of the band from album to album. "‘Til Death Do Us Unite" for instance polarized the Sodom following – some viewing it a little too punk oriented while others refreshed by this new element to their known thrash and bash basis. Intertwining the interviews you’ll get rare footage of special shows through the years, and I believe this will help you better understand how the music business works and why certain decisions are made as band members change and evolve. The interviews are done in their native German tongue, so be sure to choose the English subtitles on the main menu and gain more knowledge about Sodom than you could ever dream of.

The second DVD is the 25 year celebration of Sodom at Wacken Open Air in 2007. Tom and the boys put on a show for the ages, bringing up previous guitarists Grave Violator, Frank Blackfire, Michael Hoffman and Andy Brings as well as drummer Atomic Steif to play on material from their times in the band. Classics like “The Saw Is The Law”, “Bombenhagel” and “Christ Passion” stand out with the fervent crowd. The multiple camera angles shift from member to member, to crowd surfing and fist pumping, fuelling the energy back and forth throughout the 20 song concert. Do not worry if you feel the track listing on this concert would be the same as the previous part 1 – the main trio of guitarist Bernd “Bernemann” Kost and drummer Bobby Schottkowski really excel at all facets of the Sodom history. It is a shame that original drummer Christian “Witchhunter” Dudek was in such bad shape that he couldn’t perform as first intended, but nonetheless you’ll get plenty of value for the performance and passion put into this special occasion.

Every metal fan should own both volumes, simple as that.

THE BURNING – Hail The Horde