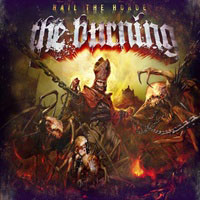 THE BURNING – Hail The Horde

One of the pleasures I gain from constant exposure to the latest metal albums would be the discovery of foreign bands who may not necessarily receive domestic support or licensing for North American territories. In the case of this particular foursome from Denmark The Burning, their track record in terms of Danish Metal Awards exposure and press accolades should at least gain some merit beyond European shores. "Hail The Horde" combines the crossover thrash/hardcore scene prevalent in the 1990’s along with a supreme dose of doom and gloom to appeal easily to the angry young men and women of the world.

Danish chugging power groove here – loads of squeals, stop/ starts, unyielding screams and that pissed off attitude you love from acts like Sepultura, Pantera or Crowbar. Vocalist Johnny Haven summons demons within as he rips his larynx on instant killer cuts like “Flames Be Your Friend” and the train off the tracks chaos of “Turn Or Burn”. On this third album The Burning aren’t reinventing the metal wheel – they merely provide the aural arrangements to ensure maximum carnage in a live setting. Alex Kjeldsen keeps his guitar riffing set on a quick hook barometer, often mirroring the mid-pace stomp action during songs like “Godless” or “Wolfmoon”.

“Inverted Cross Syndrome” crawls with the swamp sludge riffs made famous on the early Crowbar records as drummer Tobias Host takes his cymbal and snare hits at mid-pace, careens into blast beats for 4 measures, then goes back to quarter time pacing through the majority of this evil cut. The Burning have the chops to keep the bludgeoning to the point – no excessive soloing or prolonged arrangements here folks.

I won’t go as far as to say this is the new "Vulgar Display Of Power" or "Chaos A.D." – but it sure beats 99% of the latest metal core, breakdown beat down boogie you hear new bands attempting to force feed the public these days.