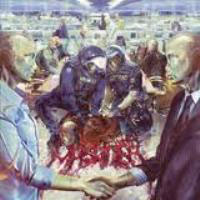 “The Human Machine” is the tenth full-length studio album from Chicago veterans Master. So, after nearly twenty years recording together, what have they got to offer?

Right from the start, you can hear the flavour of the age in which Master was born. The punk/hardcore/crossover influences are less well blended than they are in many younger, newer bands. The vocals are vomited out, and the lyrics deal with political themes rather than blood and gore. These guys have a message. Master are a band who were there when the elements of Death Metal were first being mixed together, and those influences survive, like chunks in a stew. There are shades of other things too – seminal metal like Death and Motorhead, and a focus on the songs rather than the sound.

Unfortunately, “The Human Machine” doesn’t really do it for me. The songs, though catchy at times, strive for and sometimes achieve originality but the music lacks an edge. It’s not catchy enough to make you rock out, not heavy or evil enough to make you kill your neighbour’s dog and not compelling enough to make you take to the streets and put a brick through a window.

I’m not familiar enough with this band’s back catalogue to say whether fans would praise this one, but I’m afraid I wouldn’t bet on it.