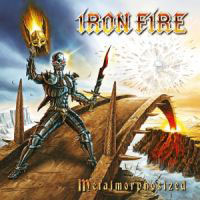 “Metalmorphosized” is Iron Fire’s 6th album, and consists of 4 completely new songs + 8 re-recorded demo-tracks. All former members contribute with guest appearances, so is quite a treat for the fans.

Iron Fire’s two first albums weren’t any good really, just average power metal without any outstanding songs. Then they disappeared for 5 years, before Martin Steene returned with a new Iron Fire on “Revenge” in 2006. "Revenge" was really an amazing heavy metal record, which still stands out as one of the better heavy metal albums of the last decade. Then two more great records followed, and so I had great expectations for “Metalmorphosized”.

Sadly I have to say I’m disappointed. Although it’s not as weak as the first two, it’s far from the great songwriting of the latter albums. Not one single track stands out after a dozen rounds, although the chorus on “The Underworld” ain’t half bad. It’s just that it’s nothing new. I’ve heard all this before. And it sounds just like it is – a bunch of leftover material, not found suited for the previous albums. The style is the same, the quality is not. Also, Steene sounds more restrained than earlier. He sounds tired, and his voice ain’t what it used to be.

All in all not a bad album, and if you’re already got the last three, there ain’t no shame in buying this one too. But I fear this album won’t buy them any new fans, as the songs are a bit mediocre compared to “Revenge”, “Blade of Triumph” and “To the Grave”.