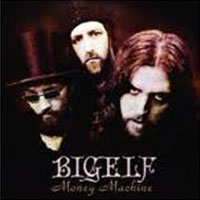 Being a big fan of Bigelf’s 2008 release “Cheat the Gallows” I was anxious to check out their previous endeavors, and with the reissues of their first three albums the perfect opportunity arrived. The reissue of the bands sophomore album “Money Machine” is added five bonus tracks in the form of one Thin Lizzy cover (Bad Reputation) and four live tracks recorded in Stockholm, Sweden, 2000. The Live tracks have decent sound, so for the hard core fans I suppose it is of some value since Bigelf have yet to release a live album.

As for the album itself it is clear that Bigelf have risen to their task on their later albums. “Money Machine” is in no way a bad album. The production, feel, instrumentation and performance are very similar to their other albums. The Bigelf aura is undeniably present. Still, I would say that this album does demand more from its audience then its follow ups. As far as 70’s prog rock nostalgia goes, “Money Machine” might even stand stronger than later albums. Still, on “Hex”, and particularly “Cheat the Gallows” the band has clearly perfected their songwriting. In comparison “Money Machine” appear a bit more “Acid-y”, for the lack of a better word, while later albums are a bit more in your face when it comes to songwriting. Whereas “Money Machine” is more like King Crimson with elements from Led Zeppelin, both “Hex”, to some extent, and “Cheat the Gallows” seems to be a more 50/50 mix between 70’s prog rock and 70’s hard rock.

For those of you who warship 70’s prog rock and acid rock, “Money Machine” might even be a preferable album to its follow ups. Personally I prefer later albums on account of its closer ties to bands such as Led Zeppelin and early Deep Purple. “Money Machine” does, however, definitely have its moments. Just check out the title track, “Mindbender” or the deliciously melodic and Beatles-reminiscent “Side Effects.” I have to underline though, that the difference between Bigelf’s albums isn’t grave, it is rather small details that differ their releases from each other. Their last one just seemed to speak to me on another level then “Money Machine” did. But don’t let this put you off checking this album out, just give it some time and it will be quite rewarding.