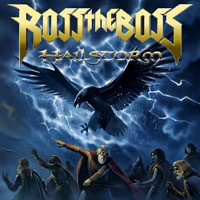 At 56 guitarist Ross Friedman still waves the banner for old school traditional power metal on this second release "Hailstorm". Most of you are familiar with his Manowar past resume, so I won’t bore you to death with ancillary details. Ross The Boss’ debut album "New World Leader" met with critical acclaim, especially for those who want more metal from Manowar than they are currently delivering with their latest studio efforts. "Hailstorm" has much in common with his historical landscape as much as acts like Accept and Judas Priest when I take in these 11 songs.

For instance “Kingdom Arise” mutates from a typical Manowar-like intro to a galloping riff not dissimilar to “Restless and Wild” from the aforementioned Teutonic veterans, while the title track nicks a similar “Fast As A Shark” feel. You’ll also gain the chance to hear Ross explore familiar epic songs such as “Crom” and “Empire’s Anthem” which should translate very well to interactive crowd sing-a-longs. There’s not much about the performance on Hailstorm that doesn’t scream late 70’s to mid 80’s metal form- so those hoping for anything other than by the book strong vocals and equally heavy riffs with that Les Paul type guitar tone will run for cover. Hailstorm resides firmly in the old school, and I don’t necessarily think this is a bad thing for many musicians.

My favorite tracks would be “Behold The Kingdom” where Ross gains a chance to develop his solo instincts (a little Blackmore, a little Schenker, possibly some Uli Jon Roth) and the straightforward street ethics of “Shining Path”. Where the album loses a touch of overall appeal would be the falsetto part of vocalist Patrick Fuchs’ range- he certainly doesn’t sound as rich and mature as his lower to middle-upper register.

Good, yet still waiting for that killer return to the first four Manowar albums.