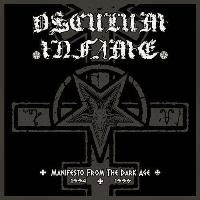 “Manifesto…” is a compilation made up of two demos – “Sadomatic Impure Archgoat”, originally released in 1994 and “I’a aem’nh s’ha-t’n” from 1995. These are followed by two tracks from a split demo with Funeral released in 1996, “Whisper of the Witch” and “Unholy Mighty Blood”.

As you might imagine we are looking at demo quality sound here. Yes, it is raw and dark but it is also hit and miss. Sometimes the energy and hate are palpable, while at other times the production feels lacklustre and without charisma.

The songs are pretty unremarkable too. They didn’t cause too much of a stir back in 1995, so they certainly aren’t going wow listeners fifteen years later. It reminds me of some sea beast surfacing – you almost catch a glimpse of something wonderful, then it dives back into the murky depths and is lost again. Ultimately, the only people I can think of who might find this interesting are people who already like the band and had trouble getting their hands on the demos reissued here. If you’re not a member of this camp, there are plenty of better things to spend your hard earned money on.