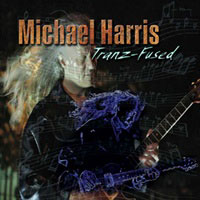 This would be one of the better guitar oriented instrumental albums to enter my laptop in a long time – but not for the obvious reasons. Michael Harris has chops – and prefers to tackle as many side genres as possible with "Tranz-Fused". “Seizure Salad” has a progressive jazz meets amusement park theme, with guitars, keyboards, bass and drums dancing in and out much like a bull let loose in a china shop. “Wizard Of Odd” gives listeners a breezy atmosphere while Mr. Harris turns out some nifty Satriani-like guitar lines and solo parts. “Rocket Surgery” throws down some funk amidst the heavier metal distortion – the rhythm section playing a cat and mouse follow the leader tact with the dizzying fusion technique and instrument knowledge on display.

And so on down the line through 7 more songs where the two drummers and four bassists who back up Michael challenge the framework of instrumental music – keeping little hook parts in mind as they really craft thought provoking material that could inspire you at your leisure. Don’t expect everything to be all guns blazing- the album does provide softer , tranquil moments during “Blue Shift” and the closer “Ocean Blues”.

"Tranz-Fused" may be a left of center album for Michael Harris – and the results should give the man wider appeal across multiple cross sections of the world. If you are a fan of exploration and fusion, this would be one of the picks for this year to hear.