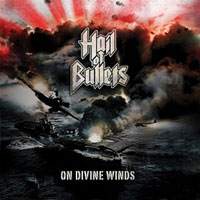 HAIL OF BULLETS – On Divine Winds

In death metal, there’s little to innovate regarding the music component of the genre. Everyone knows what conventional aspects are a given: roaring growls, maniacal screams, buzz saw guitar tones and a rhythm section that plays like it’s fighting to get out of harms way in shark infested waters. Yet Dutch veterans Hail of Bullets know that you can educate and inspire on the word side, as they certainly did with their debut album "Of Frost And War" and continue the history lessons with the follow up full length "On Divine Winds".

This time the band tackle the rise and fall of the Japanese Empire, a time period where the Navy, Army and Air Force combined their troops for the first time in military history. Drummer Ed Warby handles the production, handing off mixing chores to the mastermind musician Dan Swanö, who understands what deep death metal should be about.

Where should I start with these 12 songs? Probably with vocalist Martin Van Drunen – the throat king who takes on the lyrics with the passion of John Tardy and yet contains that clear intensity where you catch songs like “Strategy of Attrition” and “On Coral Shores” immediately without scrambling for the liner notes to understand the words. To those of you who believe every death vocalist is interchangeable, you haven’t heard the special delivery and personal touch Mr. Van Drunen delivers in Hail Of Bullets.

Musically the other four musicians are exciting and provide punishing songs and arrangements – mostly of the mid-tempo to bordering on doom/death variety (although you will get the occasional speed pick me up parts). You can feel the war-torn despair and marching strains in “Tokyo Napalm Holocaust”, Ed’s drum parts signalling an impending battle while guitarists Paul Baayens and Stephan Gebedi weave their speed picking and doom triads at will. Other cuts sure to click with consumers include the faster “Operation Z” plus the dive bomb guitar/drum/ vocal trade offs within “Kamikaze” complete with airplane sound effects.

Let’s hope Hail Of Bullets can gain stronger touring slots as a result of their album output, for classic death metal albums that can appeal to the masses without watering down their sound are a rare breed indeed. May they conquer the world.