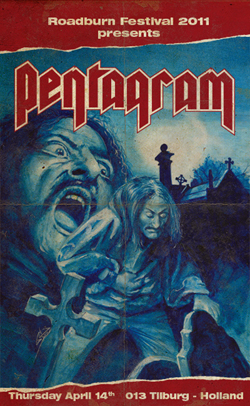 Long-running D.C. doom legends Pentagram, with riff-meister Victor Griffin back in the fold, have been confirmed for the Thursday Roadburn date, Thursday, April 14th, 2011.

Pentagram: to the enlightened few they are one of the primary architects of heavy metal and obvious progenitors of doom metal, while to others they remain a mystery.

Less mysterious and downright miraculous is how the band (or more specifically the sole remaining original member, iconic vocalist Bobby Liebling) has triumphantly survived countless setbacks to return to the stage, armed with a limited yet astonishingly influential back catalogue.

Pentagram had an inestimable impact on today’s burgeoning doom metal and stoner rock scene. Indeed, we at Roadburn Festival feel that Pentagram is on par with more widely-recognized pioneers such as Black Sabbath and Blue Cheer!

Sponsored by Terrorizer and Germany’s Rock Hard, Roadburn Festival 2011, including Sunn O)))‘s special event, will run for three days from Thursday April 14 to Saturday April 16 at the 013 venue and Midi Theatre in Tilburg, Holland. There will be an additional afterburner event on Sunday April 17, 2011.