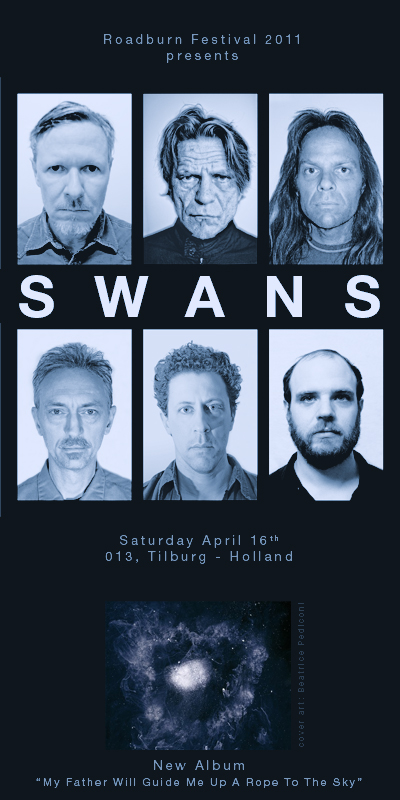 Roadburn is very proud to report that New York’s legendary and recently resurrected SWANS have been confirmed as the headliner at Roadburn Festival 2011.

Emerging from the New York underground in the early 80s, SWANS made their mark with a series of highly influential dark, abrasive, brutal and growling noise albums that served as an outlet for their unsettling ruminations on alienation, depression and the depravity of man.

After 15 years of touring and constant productivity SWANS disbanded in 1997. The band’s recent revival finds Michael Gira seamlessly shifting from Angels Of Light mode to the more heavier and noisier origins of SWANS, as showcased on the band’s forthcoming album, My Father Will Guide Me Up A Rope To The Sky, which basically starts where Soundtracks For The Blind/Swans Are Dead left off.

According to Stereogum.com: "The purists may want to crucify me, but Swans’ first studio album since Soundtracks is also one of SWANS’ best, most relentlessly dark and beautiful albums to date. Gira remains angry/venomous, but he’s introduced a kind of time-won wisdom (and guest spot via his three-year-old daughter) you wouldn’t find in the nihilistic ’80s" –Brandon / Stereogum.

Roadburn Festival regards SWANS as the single biggest influence on the burgeoning doom / sludge / drone scene aside from the obvious likes of Black Sabbath. SWANS‘ canon of work can be heard and felt throughout the entire festival and in most of the bands invited to perform. It is a massive understatement to say that we are looking forward to the formidable and brutal sonic waves and the extreme volume levels that SWANS will bring to the festival. We are still pinching ourselves that the fever dream of this highly anticipated resurrection has become a reality.

Sponsored by Terrorizer and Germany’s Rockhard, Roadburn Festival 2011, including Sunn O)))‘s special event, will run for three days from Thursday, April 14 to Saturday, April 16 at the 013 venue and Midi Theatre in Tilburg, Holland. There will be an additional afterburner event on Sunday, April 17, 2011.