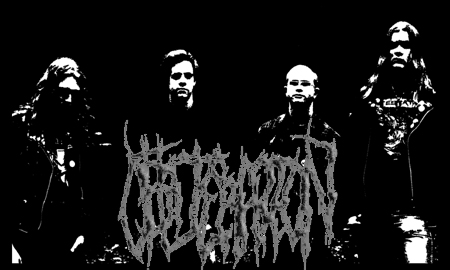 OBLITERATION is a young Death metal band from Kolbotn (home of Darkthrone, Aura Noir, Lamented Souls among others), Norway.
They started out in 2001 and have ever since left a trail of destruction behind them with HELLBLAZING gigs and rock solid releases.

After a rehearsal demo in 2006 OBLITERATION were asked to sign with cult label Tyrant Syndicate, a sub-label of Peaceville records, which is run by Nocturno Culto of Darkthrone. OBLITERATION released the debut album "Perpetual Decay" in may 2007 which got great reviews worldwide, and a UK tour with doomsters Ramesses followed.
Now in 2009 OBLITERATION are about to unleashed upon this earth their second album, Nekropsalms.
Nekropsalms is recorded by the band themselves in their own studio at Kolbotn in one week, DIY style.

Nekropsalms is a cosmic blend of old school death metal mixed with the best elements from doom, punk, thrash and old school black metal, and after 8 years, OBLITERATION have finaly found their own repulsive style. So if you're ready for a necrotic torrent of doom and horrid death, look no further; "Nekropsalms" is ready to crush the metal scene and leave it for DEAD! UH!

Tracklist:
1. Ingesting Death
2. Catacomb of Horrors
3. Exterminate
4. The Spawn of a Dying Kind
5. Nekropsalms evoke the Frozen Age
6. Styxerian Path (Into Darkness)
7. The Worm that Gnaws in the Night

The talent and sound of Obliteration has morphed from a ferocious jackal on the debut album to a BRONTOSAURUS of vibes and wonder! STAMPEDE!"
-FENRIZ of DARKTHRONE