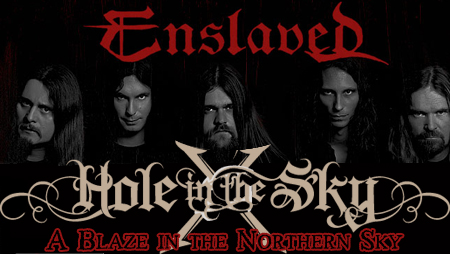 A Blaze in the Nortern Sky – detaljer (HITS)

Hole in the Sky X is closing in fast. We give you the lowdown of the spectacular anniversary concert that is set to close the Friday night proceedings. Hosted by the mighty Enslaved.

Formed in the heydays of the Norwegian extreme metal scene, Enslaved has been a constant and pioneering force for 18 years.

Their history can be divided into three "phases":

The "A Blaze in the Northern Sky" show will reflect these periods and will have the following setup:

L.G. from Entombed, Attila from Mayhem, and the man himself: Nocturno Culto from Darkthrone.

Nocturno will also be performing on a world premiere of an exclusive Enslaved song written specially for the occasion of celebrating Enslaved's extreme roots. This song will be the A-side of a 7" EP strictly limited to 500 copies to be released after the performance; more news on this will follow. The show will be concluded with a grandiose surprise song where all the aforementioned singers will team up with Enslaved and ex-Emperor drummer Faust to make sure this goes down in history in flames.

"This is going to be a night to remember. We are sharing the stage with some artists of great importance to the creation of extreme metal, some people that really made the difference and last but not least; some of our greatest friends. We are deeply honored. And, to fans of the greatest metal festival in the world; let's together give HITS the 10th birthday party they deserve. Horns up!"

Stjernespekket Tribute til Faith No More (18/6)