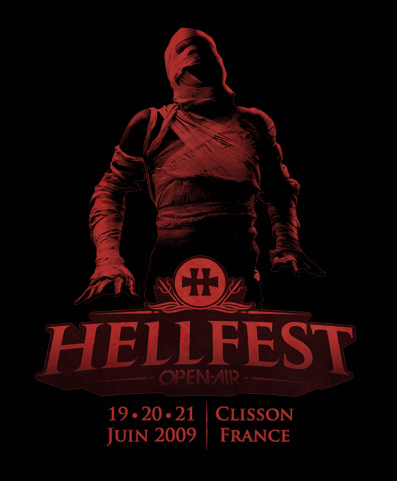 As promised, here is the list to be added to that of December 2008!
Nobody will be surprised to see names to satisfy all those who are fans
of Hellfest and it will be Christmas amm over again!

Who can already boast having seen the fathers of American Doom,
PENTAGRAM the American Black Sabbath founded by Bobby Liebling who,
unfortunately, didn't have as much fame but, nevertheless remains THE
reference for all fans of these slow and wicked musics! The first and
only date in europe will be at Hellfest! the real godfather of US Doom!

Not to forget without whom such artists as Neurosis, Napalm Death,
Sepultura and many others, would never have found their different
sounds! The inventor of Crust, AMEBIX is back in europe for one date
only, connaisseurs will be happy and all others will listen attentively
as extreme music wouldn't be the same without them!

The New Orleans scene figures in this year's addition as it was the
where Sludge first appeared in the 80's so, we are proud to announce
thet EYEHATEGOD, SOILENT GREEN, and KINGDOW OF SORROW will be there to
swell the ranks on which promises to be a very special day! NOLA should
also be there. Watch this space…….

The French connection will be present too! GOJIRA, DAGOBA who are
getting stonger and stronger, ADAGIO and BLOCKHEADS will be there for
your delight!

Fans of Metal Extreme will be delighted to see NACHTMYSTIUM a popular
American Black Metal band, TAAKE the Scandinavian group and finally,
DEICIDE, PESTILENCE, KATAKLYSM, MOONSORROW, KEEP OF KALSSIN and ABORTED
will be present. But the biggest part is yet to come, the main course is
served but the dessert will amaze the most brutal amongst you! Patience..

Last but not least, more hardcore than last year, the return of VISION
OF DISORDER for one date only in europe, our national mad men KICKBACK,
BLOODCLOT with former members of Cro-mags, Biohazard and Merauder,
BETRAYED,SLAPSHOT, BLACK DALHIA, MURDER, DESPISED ICON, AUGUST BURN RED
and TERROR so many names.

And finally.and they won't cancel (we hope) COALESCE they know they are
expected. Also VOLBEAT for all head-banging fans of Motorhead and WASP,
UFOMAMUT for all cavemen and GIRLSCHOOL with the ravishing JARBOE
showing us that women have their place in this great festival!

Well, happy? Not yet?

There are still 40 groups to confirm with tops of the bill. We promised
you that 2009 would be enormous!