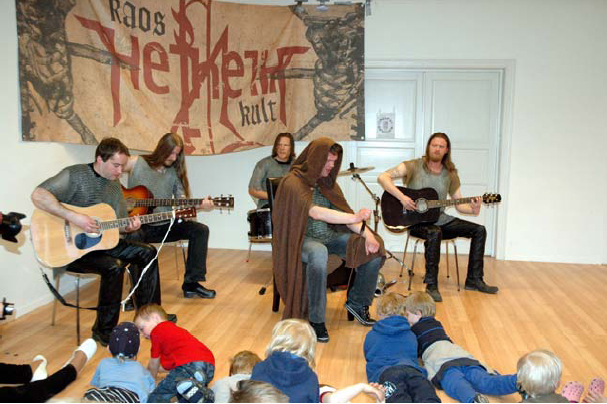 Today, the new album from Helheim, Kaoskult, is out, and the band celebrated that with a small acoustic concert at Klosteret kindergarten in Bergen. They played the songs "Svart Seid" and "Det Norønne Alter" for the kids, and told them stories from Norse Mythology. Rolf Royce who sings on the track "Svart Seid" on their new album, stepped in on clean vocals for the concert, acting as Odin.

Helheim drummer Hrymr says this about the show: "Helheim wanted to do a different kind of release concert to mark the new album 'Kaoskult'.

We played for the oldest kids in the kindergarten, and the response was fantastic! Helheim have a genuine wish to spread the knowledge of Norse Mythology, and there is no better place to start than with the young children."

Hrymr was able to put the essence of this stunt into a single sentence: "We need to let Metal and Odin catch the kids before Jesus does!".

Footage from the concert can be seen at web-tv's like:

The band will play at the Maiden Massacre Festival at Club Maiden in Oslo on the 2nd of May. Be there!