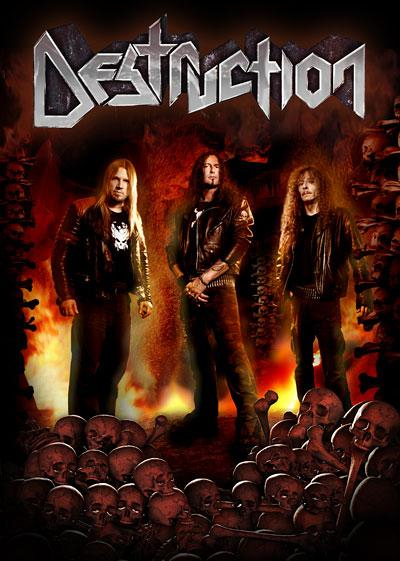 2008 – 25 years of German Thrash Metal history has elapsed, but still the unrelenting Thrash Monster that is Destruction is hungry, out there and on your trail!! The degeneration of the human race can be delayed no longer.

Perfectly transforming this ethos into 10 destructive new Thrash hymns including blistering moments such as "OFFENDERS OF THE THRONE", "UNDER COMPULSION" or "DOOMED TO DEVOLUTION", this upcoming album will re-write Thrash Metal history! Meaner and more musical than ever before, the German metal originator reports back after three years without a new studio record! Sure, "Thrash Anthems" put down a marker, but that was bringing the past stingingly up to date. This is the future. Mark the 29th of August as an "Official" THRASH METAL HOLIDAY!!!

While we were enjoying the first rays of Spring earlier this month, Destruction's three way killing machine was hard at work.  Songwriting and final rehearsals are now complete, and Schmier, Mike and Marc will withdraw to the Hansen Studios in Ribe, Denmark with Jacob Hansen.

"Celebrating 25 years of Destruction is of course an additional motivation to record a new classic", reports Schmier with his characteristic "Code Of Honour"!! "But the band has never before been so well prepared for a recording, and the new material is very dynamic crashing straight in your face! All Thrash maniacs can now look forward to a merciless and varied album which will put its predecessors in the shade! Beware!!"

On the release front the new album is set to be released in Germany on the 29th of August 2008 (Sept. 1st in the rest of the world).  And, Destruction will then devastate the musical landscape with their historic "25th Anniversary World Tour" details of which will follow in due course. There are also plans for a full DVD release later in the year; all in the cause of celebrating one-quarter century of classic German Thrash Metal with all the faithful fans worldwide!