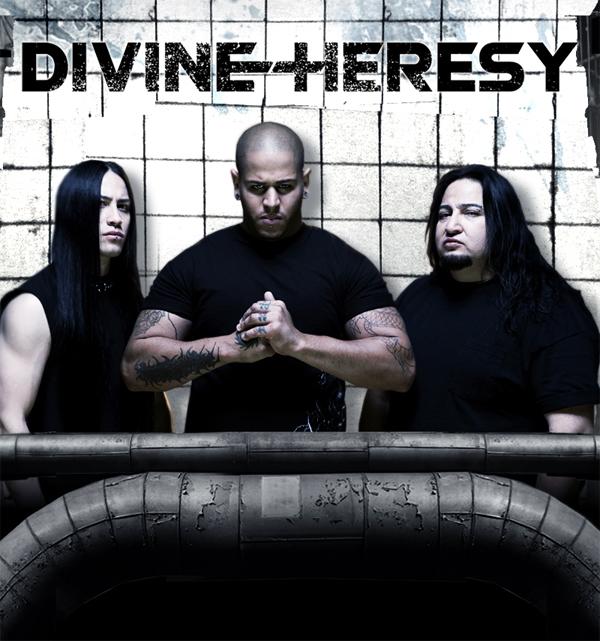 As the anticipation surrounding the release of DIVINE HERESY's debut offering, Bleed The Fifth, continues to build the full-length version of the album's vicious title track has been posted on the band's official MySpace page (www.myspace.com/divineheresyband) in order to tide over the masses. Look for it everywhere on August 28th.

The group also just launched their own YouTube page, which currently features a new video interview with Dino and stay tuned for a guitar lesson series, photo shoot documentary, drumming clips and ton of studio footage. Click the following link to check it out. http://www.youtube.com/DivineHeresy

Dino Cazares doesn't accept second best. As you'd expect from the man who co-founded both Fear Factory and Brujeria, his new band isn't about to tread well worn primrose paths. Meet DIVINE HERESY – not so much a metal band for the modern era as crimson innovators ready to transcend time and place. This new juggernaut features Cazares handling guitar and bass duties, Tim Yeung (Hate Eternal, Vital Remains) on drums and newcomer Tommy Vext on vocals. The group's highly anticipated new offering, Bleed The Fifth, will soon redefine the true meaning of extreme and force the entire genre to take notice.

The metal/hard rock world has been anxiously awaiting Cazares' return since he left Fear Factory and he will quickly prove that he was the force that propelled them to the forefront of the scene in the '90s. Cazares takes his performance to a new level with DIVINE HERESY whose brutal, unrelenting and overall refreshing sound will quickly garner legions of followers who are starving to hear something devastating and unique.