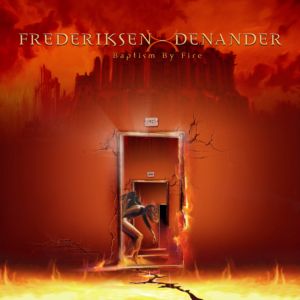 Best know for his role as lead vocalist in TOTO's "Isolation", Dennis "Fergie" Frederiksen is undoubtedly one of the most gifted singers in Melodic Rock history. He left his mark also on timeless albums such as Trillion's debut, Le Roux "So Fired Up" and more recently singing on the awesome Mecca project.

Hot on the heels of that recording Fergie, took the chance to work with Swedish guitar player Tommy Denander on his very popular Radioactive albums. Tommy is a very clever and respected musician and producer who has worked with an amazing number of artists and played on an equally impressive number of records (with more than 1000 albums on his credit list that can boast such names as Paul Stanley, Eric Clapton, Jeff Beck, Jimmy Page, Eddie Van Halen, Richard Marx, Desmond Child, TOTO and many more).

Getting to know each other better and better, the guys started to focus on the idea of working on a full album together with Tommy working on the songwriting and production and Fergie offering his incredible vocal and of course songwriting skills.

But of course when you have such amount of talent involved you can't help but call… even more talent to help! Fellow Frederiksen buddy, Ricky Phillips (with whom Fergie released the successful Frederiksen / Phillips album in 1995) of Styx, Jim Peterik of Pride of Lions and Tommy's songwriting partner on many albums Björn Lindbom  – among others –  offered their songwriting contributions to the project, while Michael Thompson (TRW), Steve Porcaro (Toto) appeared on guitars and keyboards respectively (completing the line-up on the record is NY session drummer Eric Z Daniels whose recent work include coming albums for Robin Beck, Radioactive and Jimi Jamison).

After 3 long years of work, now the wait is over and the album is ready to be unleashed. This is an unashamedly, straight ahead Melodic Rock album with plenty of magnificent hooks and brilliant musicianship. Everyone who's dreamed to listen again Fergie's voice singing on material that can live up to the levels of the Le Roux or Toto classics, can now safely add this incredible record to his collection.