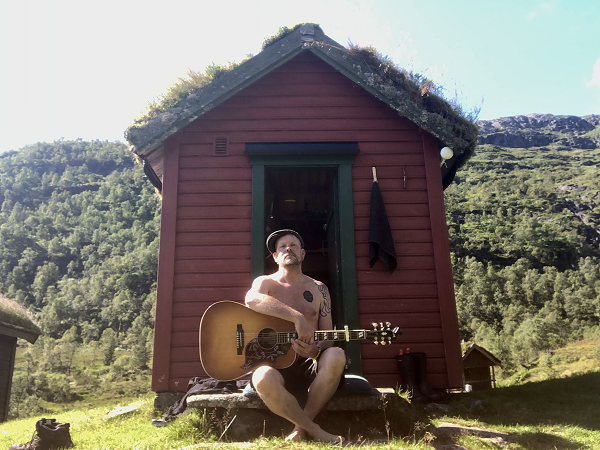 When Kim Ljung formed LJUNGBLUT in 2005, his intention was to find a vehicle for songs that didn’t fit in with either SEIGMEN or ZEROMANCER, the bands that he is best known for.  Now, with six full-length albums firmly ensconced in the annals of LJUNGBLUT’s history, Ljung finally found the time to work on something he had been wanting to do for years – and it all centres on a tiny cabin owned by his family in Nordstøldalen in Sauda, Norway.

So, accompanied only by an old acoustic guitar,  Ljung travelled alone to the cabin last summer, and laid down the foundations of what would become “Sauda”  a five-song EP  which Karisma Records is set to release on the 3rd of March.  “Sauda” is, in fact, the first in a series, inspired by Ljung’s travels.

It is such a personal project, that it is best that Ljung describes it in his own words:

Half of me comes from Sauda.
The trips across the mountains have been countless.
In all kinds of weather. Several times a year when I was a kid.
Always hiking up to the cabin in Nordstøldalen, driving down to the factory where my grandfather worked.
Those big cargoships that docked. Going onboard, meeting the captain who served tea from China, getting letters from far-off countries with stamps on.
Sauda was an adventure to me.
In the old cars, on those endless drives, there were always cassette tapes.
Sven-Bertil Taube was the favourite of mine.

I have long wanted to return to this small, red cabin.
No electricity. Alone. Too small for more than one person anyway. Only me and the acoustic.
This cabin, which was disassembled board by board down in Sauda. Rebuilt up in Nordstøldalen so my great-grandmother, who suffered from asthma would get fresh air.
The cabin journals are still there on the shelf. The first one from 1938. All the attempts and records from the ski jumps they built in winter. They jumped almost 40 meters.
The beautiful green pond right by. The hiss from the ice-cold river running down from the mountain.
Here I played to a herd of sheep for breakfast. For the twilight and the widest starry sky I have ever seen, at night.

As an acknowledgement to those car trips, filled with music from the cassette player, Karisma Records will only be releasing “Sauda” in  A Limited Edition Cassette and in Digital formats.

Recorded at the Frodeløkka Studio in Tønsberg by Terje Johannesen, and mastered by Herbrand Larsen, “Sauda” is performed mostly by Kim Ljung, with some assistance from Terje Johannesen and Dan Heide.

With artwork by Tom Korsvold, tracklisting for “Sauda” is as follows:

“Sauda” is now available to pre-order from:

More information about LJUNGBLUT can be found on the band’s Facebook page at https://www.facebook.com/Ljungblut-86549322482/  or at www.ljungblut.com

THE OCEAN – new single out