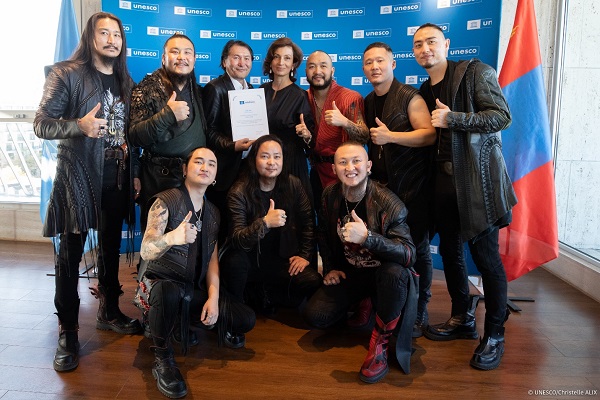 Audrey Azoulay, Director-General of UNESCO, has named acclaimed Mongolian folk metal band The HU as a UNESCO Artist for Peace at a ceremony at the Organization’s Headquarters in Paris.

After Azoulay met the eight members of The HU during her official visit to Mongolia in August 2022, their musical style and ideas immediately resonated with UNESCO‘s values and work.

The HU are the first band from the rock genre to receive this accolade from UNESCO, making this honour even more special. They join a family of artists committed to bringing cultures together and supporting artistic creation, such as Amine Kouider, Valery Gergiev and Scott Momaday, plus the UK’s own Sarah Brightman and Dame Shirley Bassey.

Founded in 2016 in Ulaanbaatar, The HU, who have thousands of fans around the world, have created a unique musical genre they call “Hunnu Rock”. It fuses rock and heavy metal with styles of traditional Mongolian music, such as the art of Khöömei (throat singing), the tsuur flute and the Morin Khuur (horse-headed fiddle), all of which have been inscribed by UNESCO on the List of Intangible Cultural Heritage of Humanity.

In naming the group, The HU as a UNESCO Artist for Peace today, the Director-General recognizes their role in promoting and transmitting this heritage. In return, they will pledge to act as spokespersons for UNESCO‘s programmes in this field, participating in events and relaying the Organization’s messages.

Band leader Gala says: “Mongolians have utmost respect for our history, culture and language that were left to us from thousands years ago through our elders and ancestors. The HU band’s goal and purpose is to first perform a unique genre of music that gives strength and power every time you hear. Secondly, to show the world the Mongolian nomadic environmentally aware livelihood that was passed down generations ago, and to inspire others to live minimalistic life and enjoy life to its fullest. UNESCO bestowing on the HU the ‘Artist for Peace’ designation shows their appreciation towards cultural diversity and heritage pieces that are of great value to Mongolians. The partnership between The HU band and UNESCO will bring awareness towards every culture that is distinguished by their unique heritage and core values, so we are excited to be part of a movement that can improve and change so many lives”.

UNESCO’s Director General, Audrey Azoulay, says: “Traditional knowledge has much to teach us, for instance in appreciating the beauty and fragility of nature. This message is at the heart of the HU’s songs and UNESCO’s work. I am delighted that we will be able to count on The HU’s voice to share this conviction on the global stage, using the power of music as a universal language, especially with young people, who will be the ones to take these values into the future”.

The band’s name, The “HU” corresponds to the root of the word “human being” in the Mongolian language. With this name, the group claim their humanist commitment. Through their music, they address the themes of gender equality, respect for difference and the importance of protecting nature. They also promote linguistic diversity by using endangered regional dialects.

In recognition of their worldwide success and their contribution to the promotion of Mongolian culture, the members of The HU were also awarded the Cultural Envoy of Mongolia certificate in 2019, and the Order of Genghis Khan, the highest state award, in 2020.

This huge honour from UNESCO comes after releasing their anticipated second studio album “RUMBLE OF THUNDER” in September this year, with 12 tracks that connect the world to Mongolian culture and its unique core values of natural preservation and spiritual connection with the earth. These core values are on full display in the heavy-rock album along with deeply meaningful lyrics that uplift Mongol people.

Over the past year The HU have released numerous music videos, each spectacularly shot and aesthetically beautiful. Visuals for tracks “This Is Mongol”, “Black Thunder” and “Bii Biyelgee” incorporate their Mongolian values and tell powerful stories, whilst showcasing the band’s extraordinary music.

The HU continue their Black Thunder Tour around Europe, performing a huge setlist including recent single “This Is Mongol” and also “Yuve Yuve Yu” from their first album “The Gereg”. hey perform in Paris tonight before heading to Amsterdam and the UK. For more show information please visit: www.thehuofficial.com

Wind instrument player Jaya says: “We sincerely appreciate the selection from UNESCO and understand the importance of the designation. From a very young age we have been practising our traditional music techniques and instruments such as long song, throat singing, horse head fiddle, tsuur, tovshuur, and we deeply know the significance of sharing one’s culture around the world and understanding the impact it has on rest of the society. Our music has profound ideas that are understood in the subconscious mind while delivering hard rock, ethereal tunes. On the surface level, our lyrics and music seem to talk about basic and yet important principles of human beings. On another level, the preservation of cultures that are in danger of going extinct and us being the representation for groups who have slightly different world perspectives than the modern world gives us huge inspiration and purpose as artists. Therefore, we will do everything in our power to be the inspiration for the cultures that are under-represented and work with UNESCO to bring more attention that they deserve”.

Producer Dashka says: “The Hunnu Rock genre’s fundamental values are based on creating safe space in the modern music world, compared to different traditional music styles that are only appreciated by certain geographical regions, that have many cultural values to its techniques and history to its instruments. UNESCO recognizing that effort and selecting The HU as their cultural ambassadors stands with what we believe in – that what we are trying to accomplish is important to not only Mongolians, but all nations around the world. In any tradition the lores and music carries so much of their uniqueness and world view, and everybody agrees that sometimes the only way to describe ones’ perspective is through music. Our goals and priorities will always be to create amazing music and safeguard the pieces of culture that were passed down to us from generations ago”.