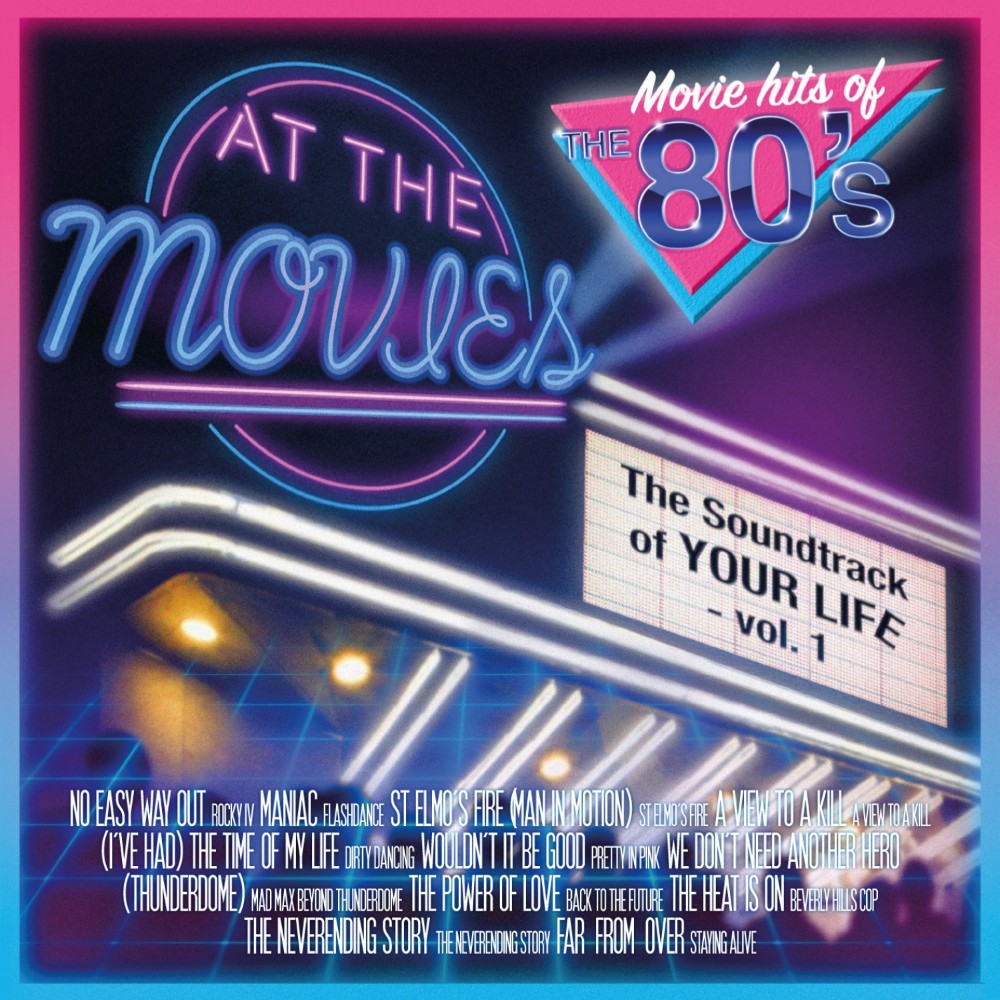 AT THE MOVIES – Movie Hits Of The 80s – The Soundtrack Of Your Life Vol. 1

Do you like 80s American movies, such as “Dirty Dancing”, “Beverly Hills Cop”, “Back To The Future”, “Rocky” or the last James Bond flick with Roger Moore, “A View To A Kill”? Well, who doesn’t? If so, chances are you also like the songs that made them famous. And now, Pretty Maid’s guitarist Chris Laney, along with bandmates Allan Sørensen (drums) and Morten Sandager (keyboards) teamed up with one of the finest vocalists in metal today, Björn Ove Ingemar “Speed” Strid (Soilwork, Act Of Denial), female vocalist Linnéa Viström Egg (Kamelot, Therion), guitarist Pontus Norgren (Hammerfall) and bassist Pontus Egberg (King Diamond, Wolf) as well as producer Jacob Hansen (Volbeat, Primal Fear) to bring you their heavy metallic versions with an overall very good result. What’s more, they have done not one album of these remakes but two, one for the 80s and the other for the 90s and this review concerns the 80s

Having heard the volume 1 – the 80s I have to say it: Björn “Speed” Strid is the new Freddie “Farrokh Bulsara” Mercury (Queen)! There seems to be nothing this extraordinary vocalist is not able to handle and he even sounds remarkably similar to the original vocalist on every track. Some songs came out better than originals, others are equals and some others came out not as good as the originals but Strid and Linnéa’s vocal performances are the constants through it all, consistently amazing. To the better songs, these are found in the first 6 tracks (if you don’t account the short silly intro). While the second track and the first actual song, “Rocky IV: No Easy Way Out” may not be perfect if still just as good as Robert Tepper’s, “Flashdance: Maniac”, “St. Elmo’s Fire”, “A View To A Kill”, and, especially, “Dirty Dancing: (I’ve Had) The Time Of My Life” are all superior to, respectively, Michael Sembello’s, John Parr’s, Duran Duran’s, and, especially, Bill Medley’s and Jennifer Warnes’ originals. My favorites include “A View To A Kill”, which had great and quite difficult to replicate vocal melodies by Duran Duran but disappointing instrumentation, here made into a raging pop metal hit with, again, Strid’s flawless vocal emulation, St. Elmo’s Fire” which sounds like Parr simply re-recorded it in metal, and, my top favorite, “(I’ve Had) The Time Of My Life”, which I had always loved before but fell in love anew with this new metal version spectacularly performed by Strid and Linnéa who outclass Bill Medley and Jennifer Warnes, something I used to think wasn’t possible. On the other hand are: “Back To The Future: Power Of Love”, “Beverly Hills Cop: The Heat Is On” and “Last Christmas” all equals, respectively, to Huey Lewis & The News’, Glenn Frey’s and Wham!, although that last one sticks out like a sore thumb since it was never a part of any 80s movie soundtrack. Besides it is completely overshadowed by Strid’s fantastic handling of “Power Of Love”, again, not the kind of vocal mastery I ever thought he was capable of displaying, the man just 5 years my junior but seemingly living breathing the 80s vibes.

Most of the shining stars are on side A (or the first half of the album, if you will) but the “Gotcha!: Wouldn’t It Be Good” is the first of the four disappointments, although it’s possible because I never cared for the Nick Kershaw’s original with its awkward and ill-fitting let down of a transition and the chorus after a promising verse, something actually quite common in many 80s hits except, of course, Depeche Mode songs. Linnéa tried hard but you can’t beat Tina Turner in “Madmax Beyond Thunderdome: We Don’t Need Another Hero (Thunderdome)” nor is “Neverending Story” metal version that much different or better than Limahl’s original, while, since I never cared for Frank Stallone’s original of “Staying Alive: Far From Over” neither do I care for its somewhat metal version.

Overall, this is a great effort by an interesting project – not ALL great but definitely fun for the whole family, and, if you’re nostalgic for the “good old days” this is a must as it will definitely take you back. Stay tuned for volume 2 – the 90s.