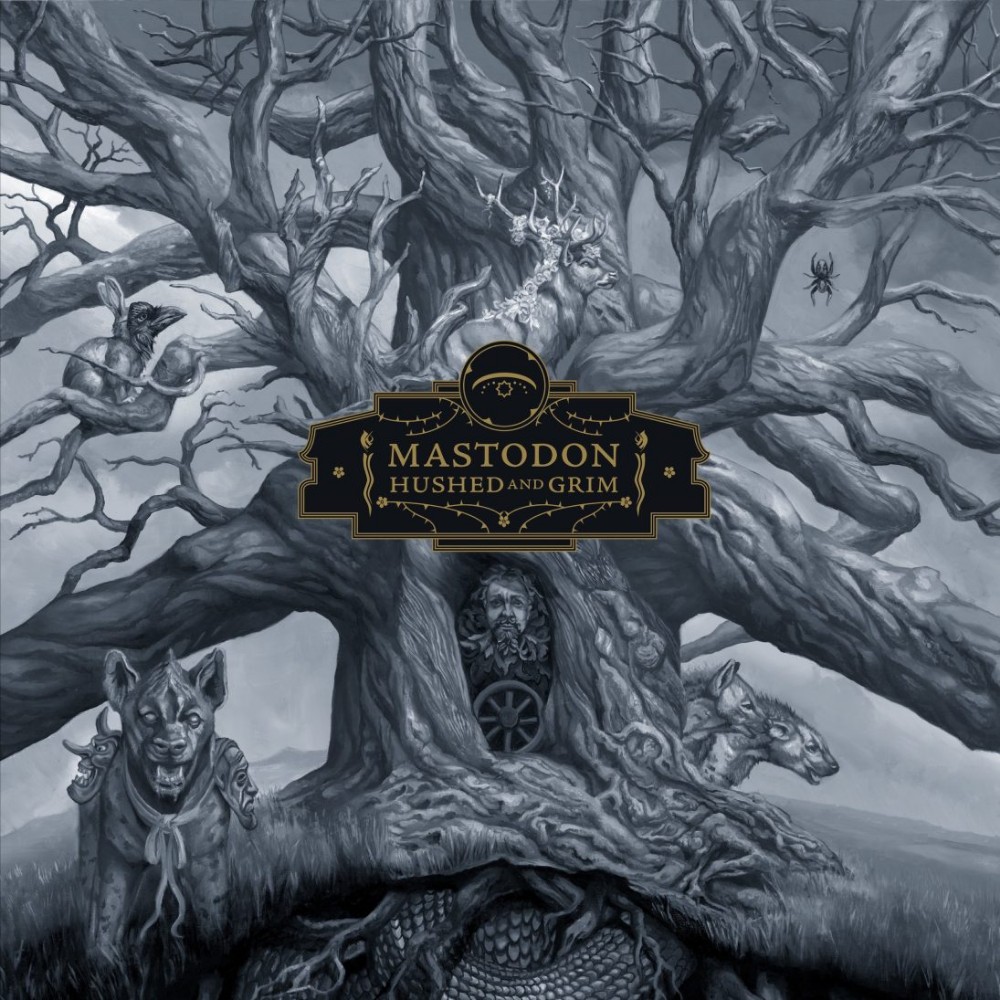 These four Georgians are one of the reasons why I love music, I mean, not just heavy metal but music widely understood. I have very fond memories of hearing the opener of "Blood Mountain", "The Wolf Is Loose", with its opening chord the freshest thing in recent memory back in 2006. And Mastodon had been one of the freshest breaths in metal since their debut "Remission" (2002) and continued to be one through the even better "Leviathan" (2004) both of which I experienced immediately after "Blood Mountain", inspired by the latter. I even liked the compilation "Call Of The Mastodon" (comprised of some of the tracks from the 2000 "9 Song Demo" and "Lifesblood" EP), it and "Blood Mountain" having come out at the best time of my life. "Crack The Sky" (2009), a more classic rock record, was challenging but I ended up loving it too, however, both "The Hunter" (2011) and, especially, "Once More ‘Round The Sun" (2014) failed to register at the same spot, while "Emperor Of Sand" (2017) had its notable moments (Precious Stones, Ancient Kingdom) but ultimately didn’t stay with me for the long haul. It was the last year’s "Medium Rarities", (late review coming up soon) a collection of B-sides and live tracks with a notable one new track, the excellent "Fallen Torches", which has begun to rekindle my interest in the band which will always have a special place in my heart because of their first 4 albums (5 if you count "Call…). And this year, here we go again, another chance for them to woo me back, a chance I have to say realized on this here, "Hushed & Grim" released/releasing October 29th.

That I find this album excellent does not mean it is perfect (which you know from the score) but there’s so much here that hits THAT spot, especially on the first half which is easily heavier and in my view stronger. Tracks like the opener "Pain With An Anchor" or the "Screamager" Therapy? versed "The Crux", the creepy attribute to the seemingly unconquerable enemy that is death, preceded by the hair-raising child’s singing "Death comes to bring with him sickle and peace" (Sickle And Peace) or, especially, the favorite "More Than I Could Chew" with the main riff somewhere between "Sorceress" Opeth and "10 Silver Bullets" Swallow The Sun while totally Mastodonian in the way it could naturally follow "Blood & Thunder" as a sequel, as well as "Savage Lands" could have all come from either "Leviathan" or "Blood Mountain" while the hardcorish video single "Pushing The Tides" sounds like playing in Killer Be Killed rubbed off much on Troy Jasyn Sanders (bass, keyboards, vocals). His Thomas M. Victor (Prong) vocals are just as strong and riveting as before but let’s not forget all 4 Mastodons, Sanders, William Brent Hinds (guitars, vocals), William Kelliher (guitars, backing vocals) and Brann Dailor (drums, vocals) commited to vocal duties ever since the founding vocalist, Eric Saner, had left right after the "9 Song Demo". It is most likely Hinds who compliments Sanders with his Christopher John "Cornell" Boyle (Soundgarden) croons, and this is by no means the only Soundgarden accent on this album. We’ve long suspected that Kelliher’s vocal input has been steadily increasing but the man who really shines unprecedently on this album in the vocal department is drummer Brann Dailor, notabene, just 2 days younger than me.

We first get a glimpse of Dailor’s singing ability in the aforementioned favorite, "More Than I…" during the fantastic melodic transition (which will be reprised on the closing epic "Gigantium") which strongly recalls "(B) The Decade of Statues" Between The Buried And Me and, you guessed it, this is not the only BTBAM accent on this album. But the track that really elevates Dailor is the late 90s Megadethian video single "Teardrinker" which may be Mastodon’s most melodic and accessible tune to date, with both the song and the video strongly reminiscent of Megadeth’s "Train Of Consequences". Another absolute stunner and the second favorite is the magnifiscent ballad "Had It All" which Megadeth, Metallica, Testament or even Pantera would give all to call their own, another very atypical song for Mastodon that wouldn’t have worked half as well as it does were it not for the fantastic vocals, this time from Sanders, probably his best vocal performance ever. In fact, roughly half of this album is clearly vocal-oriented and the other half is more heavy metal focused.

On the note of stylistic division, it is precisely where Mastodon gets both unpredictable and formulaic…all at once. With 8 tracks easily deserving 6/6 were they all like that we would be talking album of the year and all go home in peace but that is not the case. While the bluessy "The Beast" is still fantastic, "Skeleton Of Splendor", "Peace And Tranquility" and "Gobblers Of Dregs" smack of the type of progression God Forbid presented on "Constitution In Treason" or "Earthsblood" as well as heavy Pink Floydism from "Dark Side Of The Moon", "Animals" and "Wish You Were Here" days or Steven Hogarth Marillion (Gobblers Of Dregs). They have moments of heaviness which break up the formula but it gets a little too close to Grateful Dead. It must be said that none of it is ANYTHING to sneaze at on the instrumental side, oh no, on the contrary, instrumentally Mastodon are consistent masters of their instruments. It is the songwriting where they often seem to either struggle or get lost and I write "SEEM" knowing that these guys tend to plan every note. And while the diverse "Eyes Of Serpents" may be the most balanced between the two tendencies: headbanging madness and a little gratuitous Deathspell Omega pinch harmonics-tinged jazz jamboree (as well as some similarity to Dark Tranquillity’s "Empty Me"), even it is Load-ed with mid-90s Metallica a’la "Bleeding Me" or "Outlaw Torn" while "Peace And Tranquility" uses a very similar riff to "Ronnie". Again, contemporary James Alan Hetfield and Kirk Lee Hammet have nothing on Sanders and Hinds and can’t touch either one of them, just check out the solo in "Eyes…" but we seem to be gradually inching our way toward ‘Load/Reload", what with 15 tracks and the album clocking at a whopping 86:17. At that girth can you blame me for being a little nitpicky?

It’s probably no coincidence that "Hushed & Grim" has also exactly the same number of tracks as Soundgarden’s masterpiece "Superuknown" as well as similar length and structure, although the latter was definitely better structured. The heavier tracks tend to be opening the album, with "The Beast", "Skeleton Of Splendor" and "Teardrinker" smartly changing the mood and the fercious "Pushing The Tides" the last one of the good old Mastodon stylings as if to say "hold on to your pants, buster". From here on we delve heavily into progressive rock, only briefly interrupted by the wonderful "Had It All", notabene, former Soundgarden axeman Kim Thayil a guest for a track worthy of a Grammy Award, and the last scorcher, "Savage Lands" wrapping up the aggression on the album. The last 3 tracks are very similar in structure and that’s when you start taking notice of the album’s length, a non-issue on the aforementioned "Superunknown" or Dream Theater’s "Awake" or "Metropolis Pt. 2: Scenes From A Memory", that last one produced by the same man, David Bottrill (also King Crimson, Tool, Between The Buried And Me). And what is the deal with the heavily Blayze Bailey Iron Maidenic "Dagger" which, for some strange reason, and partially for the lyrics: "never there be another you…the price we pay to know you" (at the risk of a spoiler) reminds me of the tragedy in "No Time To Die" James Bond movie? Outside of stellar performances, featuring former Burnt By The Sun and Brain Tentacles drummer David William Witte guest drumming, the track sounds like either an intro or an outro while being neither.

Yet for all my griping the ending epic "Gigantium" is truly a grand achievement, initially alternatively progressive and then reprising the motiff from "More Than I…" with a different texture and that, along with the lyrics "My love, so strong, washing the dirt away, as the snakes all go back in their holes…until the flesh and bone come undone…the mountains are made in the distance" creates an impression as if none other than God Almighty Himself came down from heaven and sang it, with a near 1 minute facemelting solo that ought to be featured in the Rolling Stones Top 5 Solos of All Time or some similar such, surely worthy of the implied heavenly cameo, so, in the end, while I still think the album could benefit from some editing, the resolution is well worth the price of admission alone.

The new Mastodon album may not be perfect but it has fully reignited my original love for them. Some of the ideas and direction they’re taking may not agree with me but the epic ending suggests I should give them a chance to fully realize their vision. And, after all, we have been there before with transition from "Blood Mountain" to "Crack The Sky" and beyond. I doubt these enormously talented and even more skilled musicians will ever go down the road of musical stagnation of Metallica but rather that they will continue to surprise us sometimes positively sometimes negatively but always with class they seem to inherently possess. Hail Mastodon!