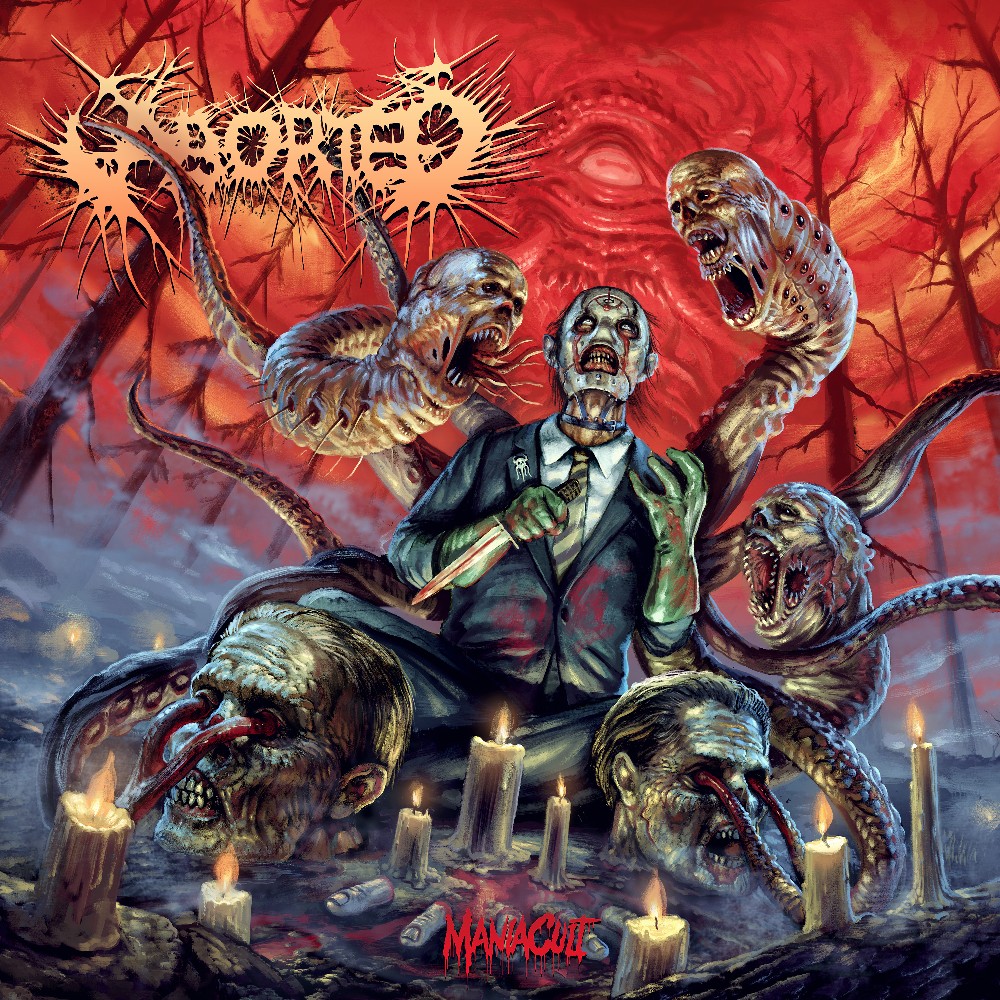 "La Grande Mascarade" EP (2020) was a promise of good things to come, as I asserted in my review (4.5/6). When you have been on the death/grind market for 26 years you really have to work hard to make a difference, especially on your 11th album. While not as fantastic as "The Necrotic Manifesto" (2014), "Maniacult" delivers on the promise of last year’s teaser in both brutal and the catchiness aspect while the sound, THE SOUND, ladies and gents is, at the risk of sounding genre generic, to die for, with low bass you can feel in your gut!

The man who IS Aborted, vocalist Sven De Caluvé never hid his inspiration with the british stalwarts Carcass. Their stylings are always present, be they on the debut "The Purity Of Perversion" (1999) or the fan favorites "Engineering The Dead" (2001) and "Goremageddon: The Saw And The Carnage Done" (2003) but it was on "Archaic Abattoir" (2005) where Aborted followed Carcass’92 and incorporated strong melodiscism into the chaos and "Slaughter & Apparatus: A Methodical Overture" (2007) only made it stronger. These last two albums are special to me because I remember cruising in my car through streets of Salisbury, MD endlessly spinning both discs in succession. Sadly, they were somewhat influenced by metalcore on "Strychnine.213" (2008) but quickly recovered on the near-perfect "Global Flatline" (2012) further pulverizing us with the aforementioned "The Necrotic Manifesto". I can’t speak for "Retrogore" (2016) or "Terrorvision" (2018) but given opportunity to review "La Grande Mascarade" EP I took advantage of it, restoring my sonic relationship with Aborted hoping for something in the vein of my favorite "…Manifesto" on one hand and to hear that "…Abattoir" and "…Apparatus" vibe on the other. I got all I wanted with a few flaws.

One element has been cautiously introduced on the last year’s EP and here made a significant part of the puzzle: symphonic synthesisers which make Aborted, basically a brutal death/grind machine with melodeath shading, into a Wagnerian monster somewhere between Fleshgod Apocalypse and Dimmu Borgir. That way the choruses are huge, catchy and still plenty devastating. That’s why most tracks are excellent, with three pure death metal perfection. Take the Carcassian short but sweet "Dementophobia" with a punkish vibe and amazing catchiness, so if death metal song could be a "hit" this one definitely would be. The slower panzerfaust of "Ceremonial Ineptitude" has so much booming throbbing low bass it’s almost danceable with a breakdown I still can’t get out of my head. Then there’s the video single "Drag Me To Hell", the one which signaled the greatness to come, again, very Carcassian and melodic with huge symphonic chorus. "A Vulgar Quagmire" groove gave me a strong Death’s "Symbolic" (the song) flashback while the first song proper (after the creepy intro "Verderf"), the malignant title track relating the Lovecraftian demon human sacrifice cult recalls Killswitch Engage or Chimaira, but the biggest impact is made by the insane hyperspeed of "Portal To Vacuity", which, while unbelievably extreme, still has catchy parts. There are moments of ambience and pace changes, transitions (Impetus Odi) and even a weird instrumental separating the 2 sides of the coin (Verbolgen) after which there seems to be more melody and groove than before it.

With plenty of changes, melodies, power, fantastic production and overall catchiness, what are the flaws? As I’ve already hinted at the material is not as consistently mindblowing as my favorite "Necrotic Manifesto". It seems to me that Aborted could have gone further down in the internal revolution of their sound so, by the time "Grotesque" and the closer "I Prediletti: The Folly Of The Gods" arrive things are getting a little familiar. Two more tracks in that vein and we could have even started talking about a formula which would have further affected my scoring but Aborted tastefully wrap things up just right with a sudden synth motiff receding into the dark.

A happy medium between "Necrotic…" and "Archaic…" days using "La Grand…" as a blueprint Swen, Ian Jekelis (guitars), Stefano Franceschini (bass) and Ken Bedene (drums) delivered yet another worthy offering for the fans of all faces of Aborted with a decidedly modern twist, and if you even suspected they were getting soft just try "Portal To Vacuity" to prove you dead wrong. Keep up the good job, Aborted!