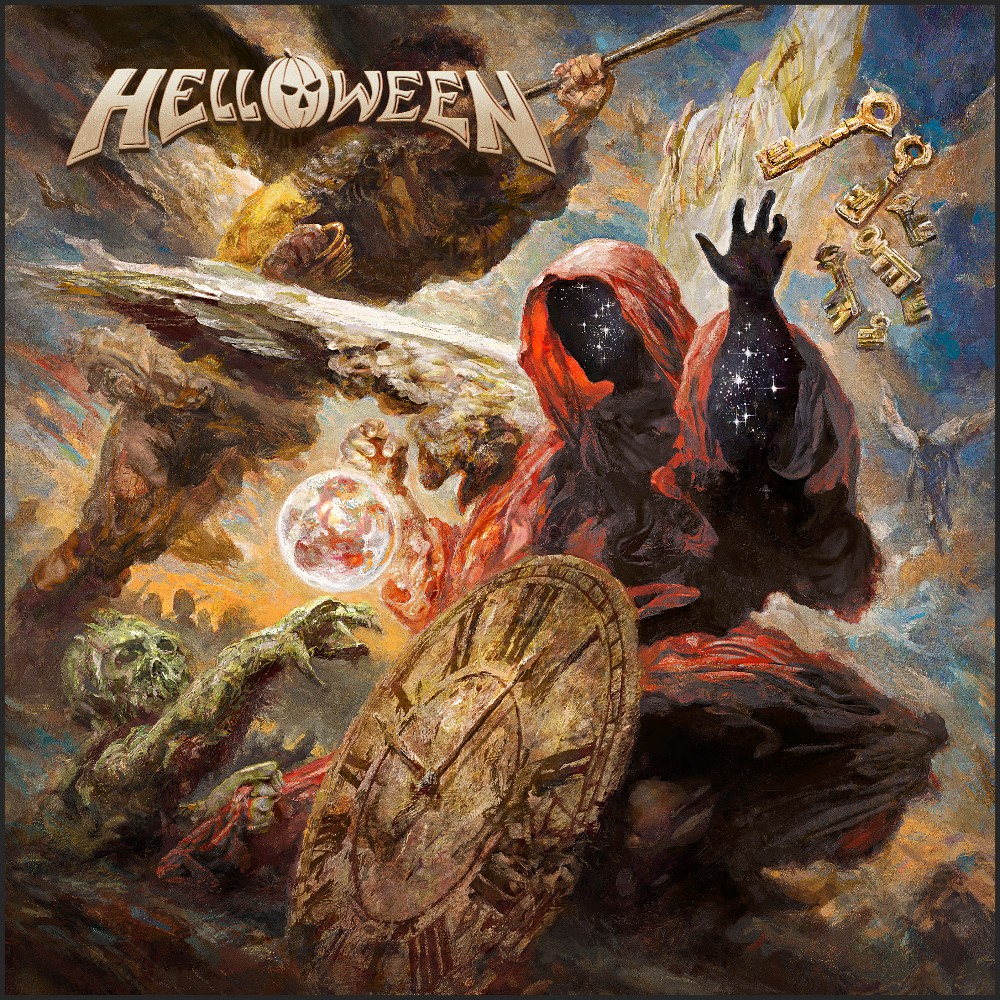 In the unlikely case you haven’t figured it out by now, Iron Maiden and Megadeth, Helloween’s two biggest influences, are my favorite bands (vide: my reviewer’s moniker). It is a curious phenomenon that genre creators rarely stay inside the box they have build and the German power metal originator is no exception. At a time when I was just starting to sample heavy metal courtesy of Metallica’s black album (first metal song heard: Enter Sandman) I was really impressed with both parts of "Keeper Of The Seven Keys" (1987, 1988) my childhood friend, Maciek, succesfully tried to inject me with a few years after their release in Poland. He’d always buy CDs at a time in Poland when they were both expensive and rare and kept them in pristine condition, occasionally playing them for me on his high fidelity stereo equipment. I remember loving"I’m Alive", "I Want Out" and "Doctor Stein" to say nothing of the title tracks but then he played "Walls Of Jericho" (1987) which was, at the time, the heaviest thing I had ever heard before. When Helloween released the vapid "Pink Bubbles Go Ape" I was so dissapointed I stopped listening to Helloween…for 30 years!

While I may have heard a track here and there I had stopped following the band literally until I heard "Skyfall" while learning Helloween was now a band comprised of former vocalists and guitarists in addition to the pre-eponymous line-up and that that construct of 7 members had recorded a new album they had simply named Helloween. To give you a perspective of why I got excited like a teenage male virgin about to have sex with a classroom hottie note that Helloween, at the time of conception (1983), featured the father of power metal, Kai Michael Hansen (guitars, vocals), Michael Ingo Joachim Weikath (guitars), Markus Großkopf (bass) and Ingo Schwichtenberg (drums), however, the band’s roots go all the way back to 1978, with several prior names (1978-1981 as Gentry, 1981-1982 as Second Hell and 1982-1983 as Iron Fist), before Kai Hansen famously said "Halloween comes but once a year, but you can have Helloween every day" and Helloween it was. Throughout their 38 year career Helloween had various line-ups (while losing Schwichtenberg to suicide in 1995), so as to, at some point, aquire Michael Kiske (vocals), Andreas Deris (guitars), Sascha Gerstner (guitars) and Daniel Löble (drums) all of whom are included in today’s lineup in addition to the three living founders. Could you imagine an Iron Maiden line-up featuring both Paul Bruce Dickinson and "Blaze" Bayley Alexander Cooke? Or, better yet, "Rust In Peace" line-up in addition to current members (minus David Warren „Dave" „Junior" Ellefson for obvious reasons)? What a time to be alive!

I was not, therefore, deterred by my 30 year disinterest in the band upon learning of such turn of events, especially after viewing the aforementioned excellent video "Skyfall" (with its tongue-in-cheeky reference to Megadeth’s "Hangar 18") but saw about securing a copy for a review and I am glad I did because this album is the antinomy of everything I hate about power metal. You read that right, I hate power metal but this a power metal album I love. Granted, there are twists and progressive turns (Fear Of The Fallen, Angels, Skyfall) thrashy riffs (Down In The Dumps, Indestructible, Cyonide, Skyfall) in addition to what are, essentially, power metal structures but the catchiness of the choruses is what makes these songs stand above the typical power metal action. It is as if the septet had listened to Walls Of Jericho" and the two "Keepers" and said: "such is Helloween such shall be our eponymous" because the riffs, melodies, choruses, vocals, hooks, the power which seriously molests thrash metal, all of the above work for the phenomenon that is the essence of Helloween frozen in time as depicted on the brilliant cover.

However, this album is simply an excellent heavy metal offering no matter the genre, one that separates metal lovers from metal tourists. I don’t think any metal fan would pan this at any rate since it is just so ridiculously well done in addition to be such fun to listen to. While the progressive "Skyfall" is an obvious highlight (and not just because I hear both my favorite bands in one song) and the best song on the album, I’d point out "Angels" and "Cyonide" and "Rise Without Chains", first two for the personally currently relevant lyrics but the first one also for the excellence in progressive songwriting and the many parts brilliantly and beautifully put together and the latter for the sheer power and overall infectiousness, while the third for the best melodic chorus on the album. Another excellent track is "Fear Of The Fallen" which I call "how to write power metal without ever approaching the risk of boring the listener", but actually, the first three songs on the album will give you a severe "Keeper" flashback (right after the opening "Out For The Glory" reminds you of The Scorpions’ "Alien Nation" guitar intro).

Some tracks, such as "Mass Pollution" go into the hard rock vibe a’la AC/DC but, even though I’m not a huge fan of the latter act, they manage to pull it off quite convincingly. "Robot King" may not have the best or the most serious of choruses but it has enough hooks and transitions to work. These are not the finest examples of Helloween’s prowess but a little pomp and pretentiousness doesn’t hurt. So, really, the only song that doesn’t quite work for me after several applications is "Indestructible" where the parts are there but the chorus could be catchier and it is the kind all those Helloween rip offs are known for. Finally, did we really need the instrumental "Orbit" before "Skyfall" as a separate track?

Overall, Helloween hits a huge home run with this eponymous album. After 38 years of existence and 36 years after their landmark debut album which started it all they show they are still as strong as they were then, capable of writing songs full of amazing solos (did I mention SOLOS?), hooks, melodies and amazing range vocals and the few peccadillos don’t merit more than a 1 point deduction from perfection. Take it from the guy who hates power metal: Buy and crank up loud!

Robert Shelton, Dave Laing, Karl Dallas and Robin Denselow – The Electric Muse Revisited: The Story of Folk into Rock and Beyond