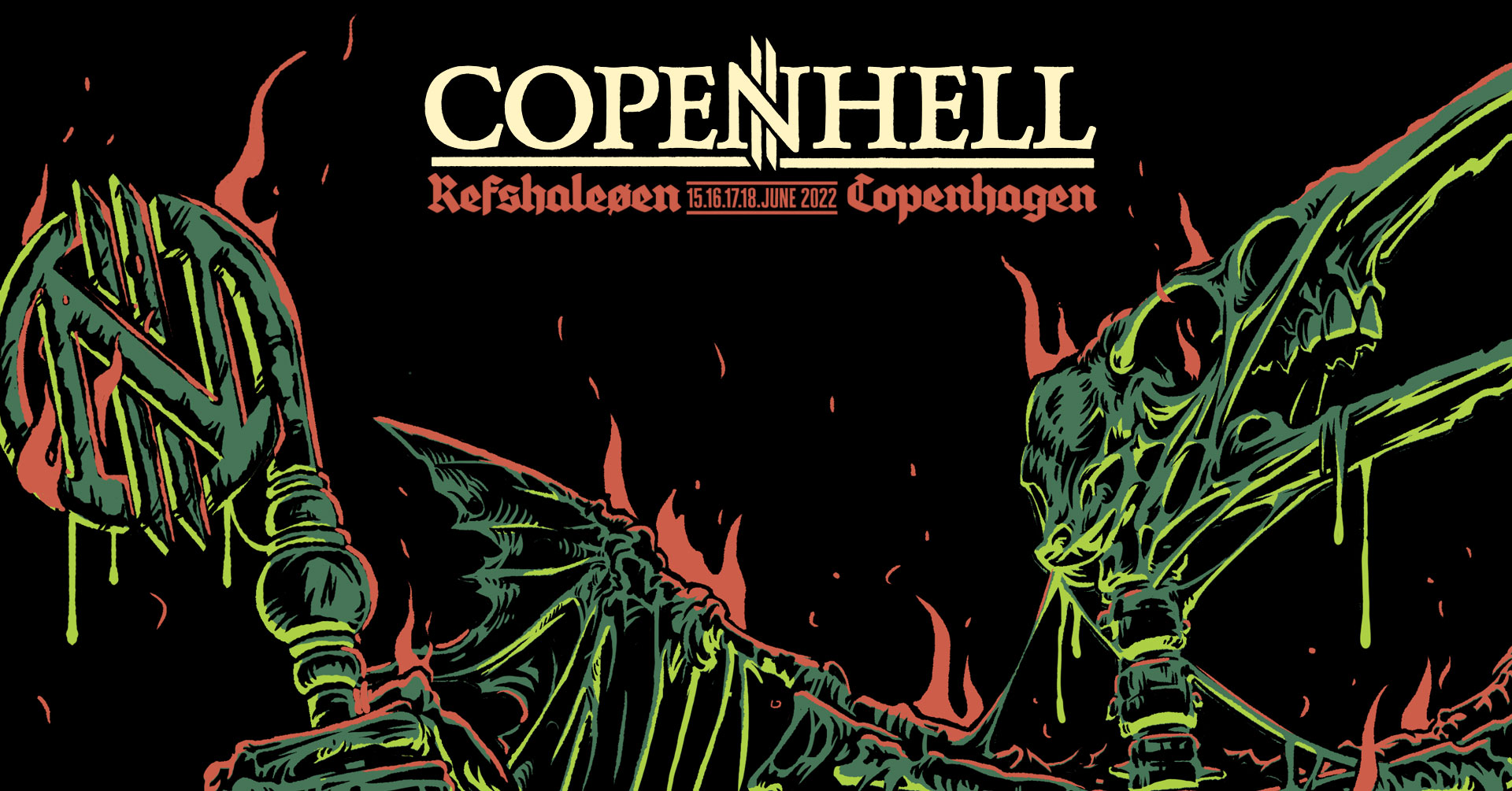 COPENHELL has stuck their hands deep into the black Danish soil and pulled up three hard and heavy handfuls of everything from rock and hardcore to death and black for the COPENHELL 2022 audience. All 16 bands were originally booked for the canceled festivals in 2020 and/or 2021, and we are very happy to confirm that they are have all returned to the line-up. On Friday June 18, 2022, Danish bands will close all four festival stages as a manifestation of the strong Danish rock and metal scene.

The engine is fueled by raw rock power when the four cheeky entertainers from D-A-D fire it up and press the pedal to the metal with their adrenaline-roaring action rock! This a band with soul that always creates unforgettable live experiences with their intense, energy, catchy songs, incredible stage presence and devil-may-care attitude, and we are proud to place them in the top of this year’s festival poster. They will perform a special ‘By Request’ concert at COPENHELL 2022, where the festival audience chooses the setlist: You can vote at www.d-a-d-by-request.com for the songs from the band’s impressive catalogue that you want to be among the 16 songs to be played during their concert. You can look forward to a COPENHELL-exclusive rock blast with one of Denmark’s greatest and most important rock bands ever!

Heathen heavy rockers BERSÆRK have achieved victory after victory since they embarked on their musical raid in 2012, and the band has won over the Danish rock audience with their unique Danish hard rock, most recently with their latest album "Jernbyrd" from 2018. In 2022, the band will perform at COPENHELL for the third time, where the audience won’t have forgotten about their most recent concert in 2018 where they performed in front of a record-breaking, extremely happy crowd. Guitar player Lars Evers and lead singer Casper Roland-Popp were also part of the all-star band Omvendt Korstog along with Tim Christensen and Jacob Binzer, among others, who performed the COPENHELL hymn "Ulvens Ed" at the festival’s great 10-year birthday show in 2019. You can look forward to going absolutely berserk together with these heathens!

SIAMESE proved at the When COPENHELL Freezes Over 2020 showcase event that their completely unique blend of heavy metalcore and catchy pop works entirely as intended: Creating infectious pop metal with great mosh quality. Their music is pure instyle and full of depth and quality – not least due to Mirza Radonjica’s formidable voice, which moves effortlessly from beautiful hi-range singing down to guttural growls.

ORM stepped directly on to the Danish black metal scene with their rock-solid debut in 2017, and the follow-up from 2019, "Ir", has been praised by many as a modern Danish metal masterpiece. The album consists of only two songs of more than 20 minutes each, and the music is just as relentlessly hard and sharp as the granite stones on the Danish island of Bornholm that the band grew out of.

REDWOOD HILL combines black and doom in a brutal, atmospheric soundscape that reaches deep into both your psyche, emotions and senses. The band’s three excellent albums so far, "Descender", "Collider" and "Ender", have thrilled both audiences and reviewers, and live expectations for these dark Danes have never been higher.

In a very short time, GHOST IRIS has achieved what many other bands can only dream of – great streaming success on Spotify, enormous praise from critics and no less than four album releases. Their music swirls around between everything from djent to deathcore, and it is impossible to confine it to just one single genre – it is a constantly changing and dynamic beast that attacks you from all angles!

WITHERING SURFACE originally ended their career all the way back in 2005 after more than 10 years in existence. Today, more than 15 years later, the band has reincarnated from the ashes like a phoenix with an entirely new album! Their sound is still heavily inspired by everything from melodic Göteborg death metal to both black and thrash, and you can experience the band’s great comeback live at COPENHELL 2022.

The extreme metal band XENOBLIGHT performed their hard and aggressive music so convincingly at last year’s COPENHELL Metal Cruise that they secured themselves a spot at the festival in 2022. In only two years, this band has shot up from the dark Danish soil with a rarely seen speed and strength. Their music is fertilized with high quality and great interplay between the musicians – and not least Marika Hyldmar’s fascinating vocals, which move seamlessly around between high-pitched black metal screams and death growls all the way from the abyss below. Get ready for a band that will entertain you!

SVARTSOT’s musical universe rests upon Danish history and folklore, wrapped in a unique blend of melodic metal and folk music – with Danish growl vocals added! It is an audio journey into the dark and brutal Middle Ages with music that will no doubt kickstart the party at COPENHELL!

Throughout his career, SOREN ANDERSEN has worked with several of the great rock music profiles, among others Glenn Hughes (Deep Purple), Mike Tramp (White Lion) and Dave Mustaine (Megadeth), and he is also known for his own band Electric Guitars. The Danish guitar virtuoso’s recent solo album ‘Guilty Pleasures’ cemented his status as an international shredder master with a nostalgic journey back to the sound of the eighties. You can bet that more than one air guitar will be played in front of the stage when this concert kicks off!

EYES has grown out of the band Hexis – and this new bands contain just as much brutality, aggression and depression. Genre-wise, the musicians have moved away from the bleak and blackened hardcore to a more wild, brawling chaos hardcore on their debut ‘Underperformer’, and your body will be punished by their music!

Being the oldest existing Danish black metal band, DENIAL OF GOD has played with their original line-up since 1991. The brothers Ustumallagam and Azter have refined the band’s gloomy music and classic horror universe throughout 30 years without compromising their brutal oldschool sound at all. The COPENHELL audience can, in other words, look forward to pure, unadulterated black metal from one of the Danish genre institutions!

The stage will be encapsulated in evil, rot and sinister darkness when WAYWARD DAWN enters it. Despite the band’s relatively recent debut in 2015, they play solid old school death metal – and the audience can look forward to a merciless, crushing frontal assault that they won’t forget any time soon!

Heavy, raw and dirty riffs are the primary characteristics of LIFESICK’s metallic hardcore, which is a solid Danish contribution to the genre’s general revival these recent years. Their music contains elements of both shredder thrash and mid-tempo death, and it will no doubt result in quite a few strained neck muscles out there.

Melodic metal core delivered like rock-hard punches. That’s what the audience can expect from the new band IVY CROWN when they turn up the volume on everything from roars to breakdowns. Their recent debut effort ‘Echo’ has both rock and punk qualities and gives the impression of a band with solid experience behind them and great opportunities ahead of them.

It’s difficult to come even close to a fitting description of the musical madness that NYREDOLK will subject their audience to. We are wandering around in the dark, chaotic borderland between hardcore and black metal, with a furious, almost painful, sound production. It is completely uncompromising noise rage with a myriad of instering details for all fans of crust-inspired music – and we expect one of the most insane COPENHELL concerts from these guys!

Everyone who chooses to keept their ticket for COPENHELL 2020/2021 can use it for COPENHELL 2022 and won’t have to take further action, other than look forward to a true earthquake of a party next year! The remaining tickets for next year’s festival will go on sale later this year.

MuddiBrooke – new single and video out